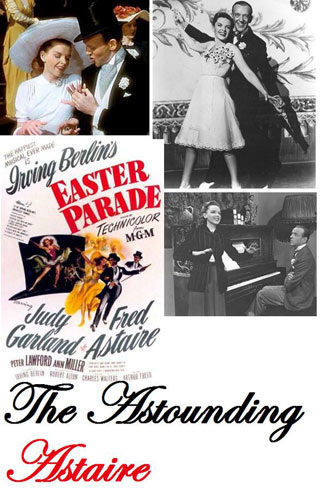 Of all the appropriate ‘Sunday afternoon movies’, the classic American musical is one of the most magical; particularly if it happens to feature the one and only Fred Astaire. Mr Astaire is such an entertainment on screen. He has a glorious gazelle like form; slight and compact but also svelte and terribly elegant. His acting is watchable and often amusing; his singing is, if not that of Sinatra’s category, competent and tuneful. However, the quality that Astaire possessed for captivating audiences and Audrey Hepburn alike was his ability to dance. I watched the pleasant Irving Berlin musical ‘Easter Parade’ recently to enjoy Astaire’s dancing and Berlin’s songs but I found myself equally transfixed with the glorious costume.

Set in the early half of the twentieth century, Easter Parade’s costume is faithful to the high-starched-collar world of New York in the era of the industrialists. Bow ties, round collars, boaters and button holes; indeed, in some scenes, the gentlemen manage to look more decorated than the ladies. However, whereas other films might represent this era religiously, garbing the leads in blacks and greys, avoiding the merry and fanciful Hollywood interpretation, Easter Parade embraces it fully. Astaire is easily the most dandified and elegant creation of the film; needing outfits that sing and dance as much as he, wonderful ensembles are provided of high wing collars, striped ties, cream waistcoats, striped trousers and spectators that give Astaire the exotic air of an eccentric patrician.

His ‘Easter Parade’ outfit itself is quite glorious; a black silk topper (natch), an off-white double breasted waistcoat, a starched shirt with detachable wing collar, an interesting houndstooth cravat, striped trousers (not spongebags) and a black morning coat. The only items that look a little antiquated, even cartoonish, are the spats. It’s unsurprising, and quite appropriate, that Judy Garland should sing these lines as she dresses Astaire in his parade clothing; “Never saw you look quite so pretty before/
Never saw you dressed quite so lovely what’s more”

Sadly, we live no longer in the natty world of the Gilded Age. However, the enduring lesson in the film is that of the timeless appeal of crisp elegance and tasteful adornment. There is something so vitally ethereal about the image of Astaire in a sports jacket, bow tie and boater, clicking his spectators along the floor, something that would almost certainly not be present were he to click around the same floor in an unbuttoned shirt and Armani suit. However, this is not to suggest that one needs the valuable feet of Fred Astaire to produce such an effect with the clothing but simply an attitude that conveys the same elegance.

As a muse and a clothes horse, Astaire is unmatched. He brings a character and warmth to the clothing that releases it from the cold and distant historical context of early twentieth century history; that time of smoke, suffering and sepia into the brilliant Technicolor world of music and dancing. The razzmatazz works its charm on clothing symbolic of propriety and dignity by gilding and yet softening such rigidity; Astaire in a bow tie and buttonhole is the very picture of elegant, and playful, innocence.