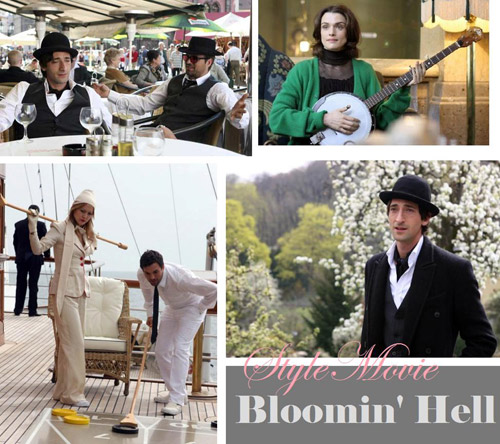 An American couple stopped me the other day on the Mall for a little direction or two. A blistering day, they were short-and-sandled up, sweating like bulls. “Hot isn’t it?” I asked somewhat victoriously, knowing that our North American cousins are consistent detractors of our usually appalling climate. “To be honest with you” the chap wheezed, “it’s a little too hot. I’m rather disappointed. I thought I’d come to London and spend the 4th July walking in the rain. You know? See the real London weather.” As shocked as I was to hear that someone could be disappointed by sunshine and long for the dreariness of our stereotypical weather, I was rather delighted by this interesting remark. Here were a couple of visitors who had paid good money to get rain and we could only offer sunshine.

It put me in mind of a film I had recently seen which, stylistically, offered me my own cold dish of ironic regret; The Brothers Bloom was a movie which I had gone to see for its style and yet, whilst viewing it, wrestled with that very conceit and willed it to be a little less glamorous than it actually was. Generally speaking, stylish movies attract me because I am a follower of aesthetics; this one attracted me and from the first moments almost immediately repulsed me. It has been compared as a superficial paean to the sometimes plotless and glossy fancies of Wes Anderson (The Darjeeling Express, The Royal Tenenbaums) full of kooky costumes, improbable posturing and vivid colouring. It is like Anderson in that each frame is contrived to look like something from an older movie but it is unlike Anderson in that the costumes, for they are certainly that, are only occasionally attractive and nearly always out of context.

The leads, Adrien Brody and Mark Ruffalo, are attired in what I would call a jazz club uniform; white shirts unbuttoned with black silk ties, grey waistcoats, dark glasses and a pork pie hat. Until you see a certain motor car, you’re not even sure what decade you’re in. As confidence tricksters their attire is ludicrous; who would be conned by someone who looks like an out-of-luck bass player? As characters their costume is too stylised to be credible or likeable; their affectations of dress get in the way, they look too mawkish to be so whimsical in attire. Brody particularly grates in this regard as he delivers his lines of appeal so wanly that you want so desperately to throw a bucket of ice water over his head; it is positively bizarre to see so pathetic a character sporting a cravat and bowler hat.

Improbability continues on a transatlantic voyage on a vessel little larger than one of the Vanderbilt’s yachts which, while beautiful and a useful lesson in ‘how to travel’, does not distract from how contrived the prop actually is; style for style’s sake is usually attractive but in this context it is hideously out of place. After all the homburgs, bowlers, mouthfuls of silk cravats, teak decks, luxury trains and dark glasses I too found myself longing for the rain.