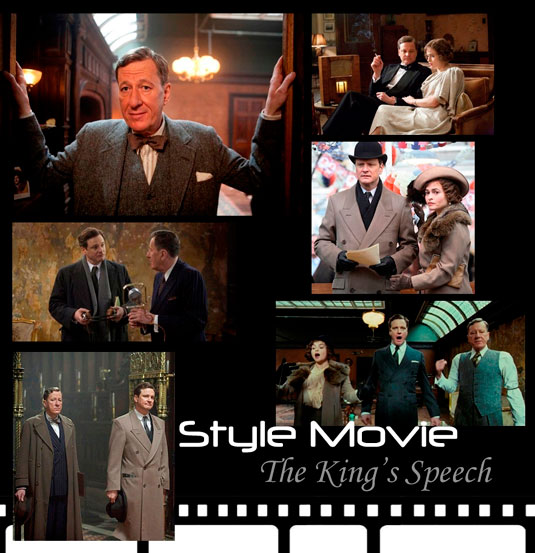 It is over a year since I last contributed to this series. The simple truth of the lapse is that though I must have seen over 50 films in that period, none of them stirred anything inside me which was capable of inspiration.

None, that is, until I saw The King’s Speech.

A film that has received plaudits from far and wide – from the New York Times to Her Majesty herself – it is easy to regard The King’s Speech ‘superficially’ as simply an excellent and uplifting true tale of triumph. However beneath this ‘surface’, it is also a film which manages to preach elegance without once ascending to the pulpit, a film which indulges and educates the viewer in inter-war sartoria without excess showiness – a wardrobe performance worthy of it’s regal title.

Colin Firth, first as the Duke of York and then as George VI, is the picture of patrician sartorial cleanliness; matte wool suits (no shiny tack in these decades), soft collars and thin silk foulard ties. In fact his wardrobe is so achingly classic, it’d be difficult to say anything in his ensembles was ‘dated.’

Geoffrey Rush, by comparison, is more extravagantly dressed – if extravagant is the correct word – as he adorns himself with bow ties and chalk stripes; the kind of natty get-up you might see Manolo Blahnik strutting around in. Still, though his dress is more individual, it is no less worthy of the ‘timeless’ award.

Both men, giants on the screen, advance the quiet but strong case for such careful sartorial thought that to see them accepting awards for performances in their own clothing is something of a disappointment.

This happy period of men’s clothing is pleasing to the eye. So much so that it provides a raison d’être to entire brands – Hackett, Ralph Lauren – and as such it is always ‘with us’ to some extent. Perhaps it is this reason why the costumes in The King’s Speech, aside from those of Helena Bonham Carter, seem somewhat familiar. They do not distract because they are both a happy harmony of the best of historic men’s clothing and that which we know and use today.

There were even subtle details which tickled me as much as the excellent script; the fact that Geoffrey Rush’s wardrobe was limited in size whereas Colin Firth’s was gigantic (I didn’t see a repeat garment) was true to character, as well as the fact that Geoffrey Rush’s trousers were of inferior tailoring (too long) and that there were no noticeable problems with Firth’s at all. All these subtle differences were more indicative of the gulf between the gentlemen’s positions in the world; one a speech therapist, the other a royal prince.

My favourite moment in the film came when, having told his children a strange story about a penguin, Colin Firth lurched onto the floor, in white tie, to hug them good night at which point his white elasticated waistcoat came undone. However, instead of clipping the scene and pasting in one in which his waistcoat was correctly fastened, Hooper allowed us to see a marginally unkempt prince momentarily fiddling to restore his waistcoat. Natural and utterly charming.