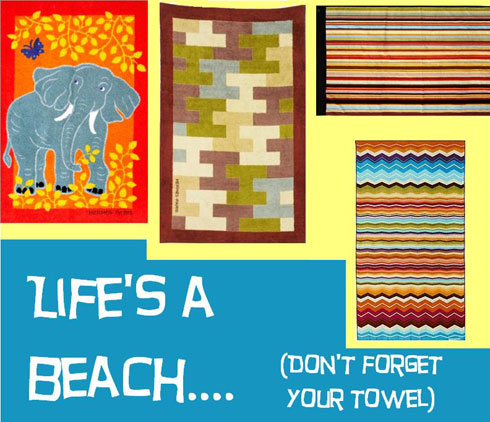 “Aaah!” the gentleman exhales with relief “beach life!” He lays himself on the golden sand, glistening from his brief dip in the chilly, turquoise waters, the sound of which he now conceals with a carefully selected playlist, largely populated with Bob Marley favourites. The sun bakes his skin and he smiles, in genuine satisfaction; by the time of his return to a cloudy mother nation, he will be able to crack smiles and admiring glances when wearing his distinctive and punchy tangerine summer shirt. All the appurtenances of a sophisticated hedonist are at his disposal; iPod, award winning literature, chilled caipirinha. His life is so well accessorised, he even begins to contemplate the thought that he might (shush!)…have too much?

This bourgeois thought does not trouble his sandy head for too long before he remembers that he is lying on one of those feeble, overwashed, crusty room towels that hotels so perversely cherish (“Please do not take towels from your bathroom for the beach”); small, uncomfortable and barely absorbent, it’s also a rather disturbing off-white which makes it look as though it has been stuck in the pool’s drainage system for the past fortnight. Our gentleman had assumed, like many others, that a private beach and large pool area automatically indicated a supply of towels to rival that of Champneys. Admittedly, a good hotel should provide all linens and towels throughout a stay – one should not have to waste clothing space with lumps of spongy cotton. However, for the gentleman of distinguished taste a decent towel is an essential accessory when ‘swimmy’ and ‘beachy’ frolics are in the offing.

The beach towel that a gentleman selects says as much about him as his linen shirt, wristwatch or patterned swimshorts. At the chilly introduction of evening, he can be seen sipping mojitos on the shore, his beach towel wrapped tightly around him, as though it were his family standard keeping him warm. A beach towel is a companion; as comforting as it is essential.

First and foremost, it must be of a sufficient size and quality. Small and fluffless beach towels are heinous. Cotton terrycloth is the only option for a material; stay well away from cheap microfiber towels.  Secondly, colour must be considered carefully. Plain white towels, while versatile, are likely to be mistaken as hotel owned and you might have a hard time convincing Fabrizio the pool guy that your own property is mixed up in the mass of soggy suncream n’ sweat soaked cotton that fills a vat of used towels. In fact, anything too ‘plain’ and your towel might be mistaken for an oversized bathmat – pattern is the key to the classic beach towel.

Avoid the vulgarity of advertising your brand allegiance to the helicopters that swirl above; there is no brand display more pathetic than a gigantic name printed across a beach towel. The opportunity of purchasing a towel is an opportunity to express yourself in a way you might be disinclined to with clothing; after all you do not, technically, wear a towel. It is something you lounge on, wipe sunglasses on, cosy up with on the terrace whilst watching the sun set. It belongs on holiday, not at the pub with your drinking mates. Therefore, a little pattern, a little colour, a little design – the sort of thing a gentleman only admits to liking in pillow talk – is perfectly acceptable.