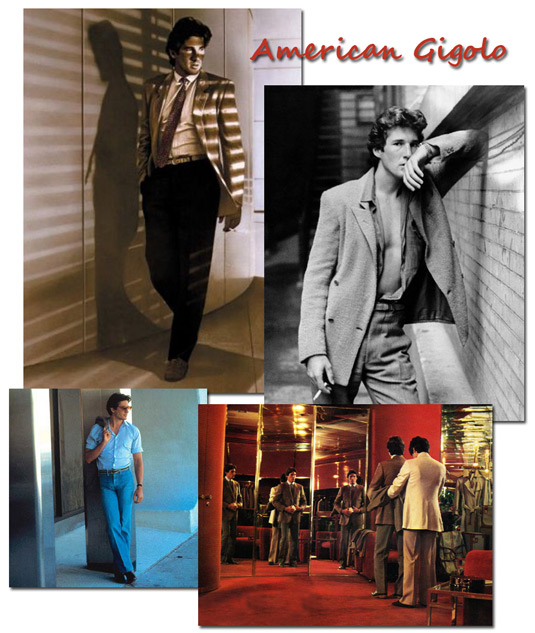 American Gigolo (1980) stars Richard Gere as Julian Kay, an escort for wealthy women who is framed for the murder of one of his clients and the theft of her precious jewels. The movie was written and directed by Paul Schrader (of Taxi Driver fame) and produced by Jerry Bruckheimer.

American Gigolo is often listed among the top style movies of all time. The movie burst on the scene at the end of the bell-bottom disco era and stood as a preview of the narcissistic and hedonistic decade that followed. It is also the movie that introduced the world to the Armani suit and propelled Giorgio Armani, who created Gere’s wardrobe, to instant stardom.

The movie’s focus on luxury clothing becomes immediately obvious when one of the first scenes has Gere trying on tailored clothing in a high-end men’s store. Gere’s wardrobe includes soft, unstructured suits in silk, linen and Italian cotton. In a complete departure from the style of the 70s, Gere wears small collars, narrow ties, skinny belts and surprisingly high-waisted trousers. The movie ushered in slim Italian clothing as the style for the 80s and influenced the dress of an entire generation of men.

One scene that epitomizes the self-absorption and greed of the decade has Gere pulling out clothing from his immense closet and hyper-organized drawers. He then obsesses over the details of each outfit as he lays out Armani shirts, knit ties and jackets on his bed.

One casual outfit that I found to be particularly interesting included light blue jeans with a ribbon belt, a pale blue shirt, an unbuttoned double-breasted gray jacket with patch pockets and brown boots.

Unfortunately, where the movie shines in style, it lacks in substance. Most of the movie is an excuse to watch Gere (who is very fit and tan) dress and undress, and cruise around town in a Mercedes convertible. It does not even become apparent that the movie is a murder mystery until the first hour is past. Nevertheless, the movie includes some good music and provides a window to a now-bygone era of indulgence and excess.