Is the Suit on Borrowed Time? 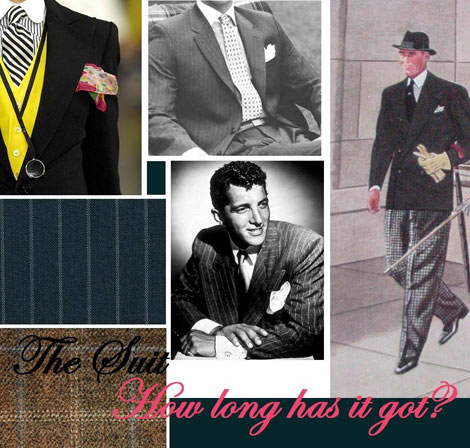 A lot is written about suits on men’s style pages. A heck of a lot in fact. And it is hardly surprising that it should be so; many of us require, for professional, occasional or aesthetic purposes, a suit at some point in our lives. My first suit came before I was seven. I looked rather ridiculous of course; an improbable character from a fairy tale – with blonde ringlets, a little waistcoat and tiny turn-ups – but it was the beginning of what I project to be a lifelong relationship. As with all relationships, there are ups and downs; our vain flirtations with casual dress are corrected by inevitable reconciliation with one of the most essential items in a gentleman’s wardrobe and one of the most splendid inventions in the history of fashion.

Of course, there are those who cry that suits have lost their relevance; “I only wear trousers and a jumper to work – suits are a pain”/ “It’s a day at the office, not a wedding.” The de-formalising of everyday wear, and the ranking of suits among the archives of ‘customs past’, led initially to fashion’s secret swag: the suit has been one of the most important items in high fashion for the last 5 years. Consequently, the high street chimed in with cheap and cheerful representations; smart became different, cool and respected. Now, the ‘smart man’s’ wardrobe is everywhere: personally, I never thought I’d live to see three piece suits at Next but there they are for all to see.

Many of those who follow fashion rather more religiously might predict a decline in the suit as a channel for contemporary expression; over-production and over-popularity might lead to the classic fashion knee jerk – “Right no more of zees soots!” Of course, there’ll always be suits as a small staple in the gentleman’s outfitter but will they weigh down 40% of the racks in some major high street retailers as they have done for periods in the last half decade? Possibly not. Will they recede in the consciousness of the masses as something to wear on a rather ordinary Saturday night? Probably. The result is not something which I am sensitive to; I don’t care to dress as the majority dresses. And, I might suggest, that particular thinking might go for a good number of readers.

The question is; how much will a repudiation of the suit affect its position for the future? Is the recent rally, helped significantly by fashion and mass market retailing, the beginning of the end? There are arguments to hush the sceptics. We will of course, always require something to wear; but questions about the appropriateness of our suits’ current designs, designs which are certainly old and very, very established, might materialise. I have always looked on the suit as something solid; so much so that one takes it for granted. “It’s too big to fail” said a pal of mine at dinner “tell me, what would make us switch?” I had no answer for I, like him, am a faithful buyer and a firm believer. “Although there are many” I wagged my finger “who are not.”