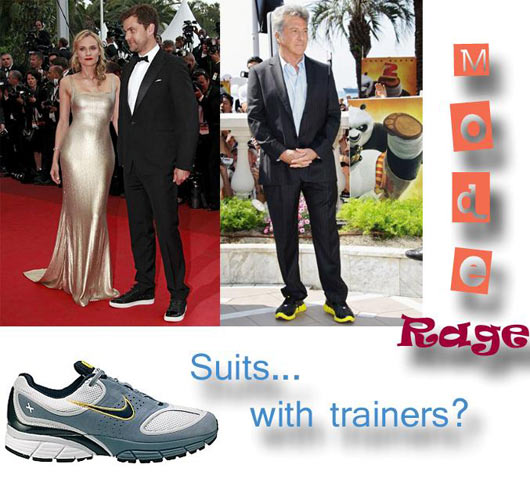 Who on earth first thought of pairing a suit with training shoes? It is an aesthetic so hideous, so irritatingly lazy and childish that I cannot help but lose a sizeable portion of respect for all who indulge in it. I was therefore dismayed, though not entirely surprised, to see Dustin Hoffman photographed in Cannes at the film festival wearing a pinstripe suit with neon-soled running shoes. Whatever possessed Hoffman to display himself in this manner, though he is hardly well-known for any particular sartorial elegance, I do not know. His oddball characters do inspire a kooky aesthetic but there is kooky and there is cuckoo.

And then there is Joshua Jackson, accompanying his elegant, shimmeringly attired girlfriend Diane Kruger to an evening event wearing black tie – and skate-sneakers. An appalling, burger-sauced burp of a choice, Jackson should know it is ungentlemanly to upstage a lady in evening attire but to do it in such a manner is simply pugnacious. Frankly, he doesn’t deserve his invite; his arrogant, idiotic choice of footwear is akin to inappropriate drunkenness, boorish language or talking with your mouth full and is highly embarrassing for his companion who would have been better off pacing the carpet with one of the serving staff instead of her selfish beau. Every time someone attempts to combine the elegant with the never-going-to-be-elegant, it fails; imagine if Kruger had worn Havaianas with such an ensemble, citing the discomfort and impracticality of heels.

Trainers and suits don’t exist in the same universe. Never would it be seemly or sensible to exert oneself in a gymnasium in a wool suit; wearing gym shoes to a premiere is equally mad. My theory is that those who do such things do so because they are pretentious enough to belligerently convey that they ‘just don’t care’ when the unaffected choice would have been to acknowledge the event for what it is; an occasion requiring a certain type of shoe. Some might think this a touch pompous but the real pomposity is to consider your pathetic, non-conformist visual message more important than the person you accompany and the event itself.