Last year’s summer wasn’t as uncomfortable as we had all hoped for. In fact, it was so bearable that it caused great consternation in my social circle with frequent bellows of ‘This weather is ridiculous!’ or ‘Where has the bloody summer gone?’

Such perverse reactions are normally reserved for days of oppressive heat when my acquaintances roar, without a trace of irony, ‘This weather is ridiculous!’ or ‘Where has the bloody English summer gone?’

The learning from such outbursts, dear reader, apart from the fact that Englishmen are irritable and cantankerous, is that the seasons are often unpredictable in such a country as ours. And the British Isles are scarcely an isolated case. Topsy-turvy, bizarre and befuddling weather has dominated the environmental concerns of a great number of world nations. As Mother Nature straightens her skirt, this issue continues to be front page.

One of the more superficial concerns of unpredictable conditions is the possibility of sartorial mishap. Will it be too warm for this? Is it too cold for that? No one wants to be the naïve optimist shivering in a Hawaiian shirt or the cynical party pooper in a sensible jumper; doing right by Messrs. Celsius and Fahrenheit is in the interests of all. I was recently at a function during which I conversed with some young rogues about formality of dress. It was an unusually chilly day for late May, but I was adequately attired. The argument of the chaps I bantered with was that on particularly warm days, pigheaded adherence to dress code – the sort of thing that saw the pasty colonials roasting in starched collars and waistcoats in India – should be shunned. Whilst I agreed with them that dressing for the temperature and surroundings was paramount in order to avoid appearing absurd, I contended that adaptation of a code was possible; in other words, you loosen or change the tie instead of removing it entirely. 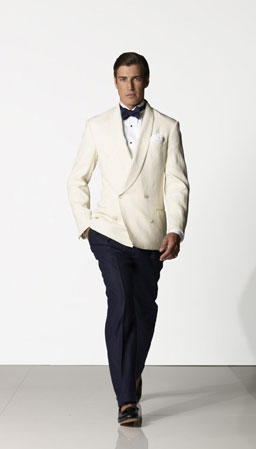 This outfit, from Ralph Lauren’s Spring 2009 collection, is a perfect illustration of that ideology. Instead of resorting to an unbuttoned, unkempt ‘Hey it’s hot so don’t be hating on me’ ensemble, a man can adapt a smart, conventional outfit – in this case, black tie – to suit a particular location, environment or temperature.

The most attractive combination in a sweltering atmosphere is the near impossible unification of smartness and cool; this outfit is that unification. Instead of harsh and heavy black barathea wool, the deep blue trousers appear to be of a much lighter, freer virgin wool. The jacket, ivory, double breasted and shawl collared, is formal enough to be taken seriously but casual enough not to throw the flow of the ensemble off. It appears to be made of sympathetic silk linen, perfect for sweaty summer evenings.

The accessories are simple and inconspicuous; a deep blue bow tie (to match the trousers), a simple white cotton pocket square and a pair of dandyish pumps – the Elkannish absence of socks completes the look flawlessly. Black tie; loosened but not removed.