Dressing for Summer Heat in the City

Though we welcome the warmth of summer, the thought of ‘heat’ united with the ‘city’ does not sound at all like the ideal. Heat is best combated in the languorous cool of the countryside, where idleness is a requirement rather than a mere possibility.

The city’s problems seem only to be exacerbated on exceptionally warm and particularly close days; we become more bothersome and irritated, public transport is quite unbearable, we dehydrate and develop a crabbiness that seems unique to the concrete jungle; the idea of an idyllic spot in the shade, surrounded by trickling streams, birdsong and a cool breeze seems almost impossible and remote on such occasions.

Hot days in a metropolitan context, though common, are best avoided. I myself am particularly affected. The worst possible edition of Winston JP Chesterfield is one that scrabbles uncomfortably through a sea of shoulders, sodden with sweat, dizzy from heat and exhaustion, maddened by the interminable sirens and incessant hum; on such days, I would not wish my beastly company on anyone.

However, I cannot avoid such Hyde-ian transformations. Whatever the temperature, it is business as usual. I have never provided a credible excuse for absence on these ‘overly clement’ days. Steps are taken instead to avoid the turn. 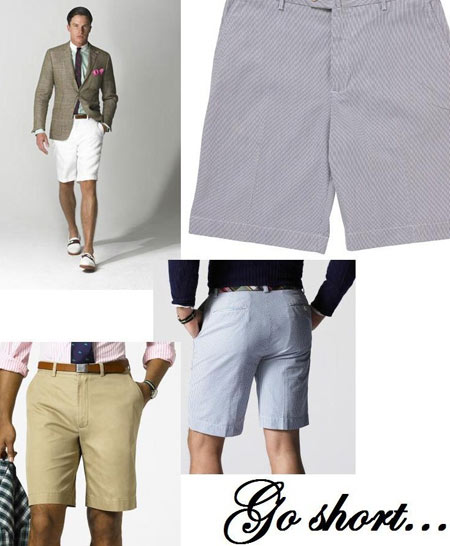 Firstly, when it is very warm indeed, I simply have to wear shorts, particularly when I am walking through London and spending a great deal of time outside. I think shorts have been given a jolly rough time, sartorially speaking. One of the greatest problems is that merely because bare leg happens to be on display, many assume we can only team the garment with t-shirts, polo shirts and trainers.

Putting on a pair of shorts brings back the novelty of P.E. sessions or sneaking out of the office a little early to play a couple of sets with an old chum; they’re just too sporty for us to take seriously. However, I think this is a shame. Shorts may very well be less formal than trousers, and we would hardly turn up to an important meeting and expect to be taken seriously, but they can be very elegant.

Avoid the multi pocketed combat shorts and go for the neat, tailored styles. As for length, it really depends on the occasion and also how shapely and appealing you happen to think your legs are. Very smart clothing calls for shorts that finish just above the knee, whereas more casual items can be worn with the ‘short-shorts’ – exposing more of the glorious thigh.

And as strange as it sounds to wear shorts to work, it is actually done. I know several people that, last year, wore tailored shorts to the office on certain summer days. Maintaining the preppy chic of the upper half with a tie, shirt and blazer and rounding it all off with a pair of elegant shoes is key; without these elements, it will look far too relaxed. 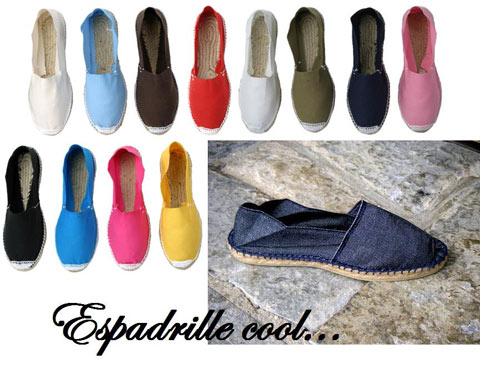 I think espadrilles are wonderful and I hate to limit their use to the very few weeks a year I might spend traipsing around resorts, ruins and Ravello. Even London can be an appropriate location for the rustic chic and practicality of these simple items of footwear.

They are hardly appropriate for the working week, but come the days of freedom, these will serve you better than trainers, plimsolls or loafers; they are cooler and inexpensive and the multitude of colours to choose from means you can match them brilliantly to other items of the ensemble such as a polo shirt or a pocket square. 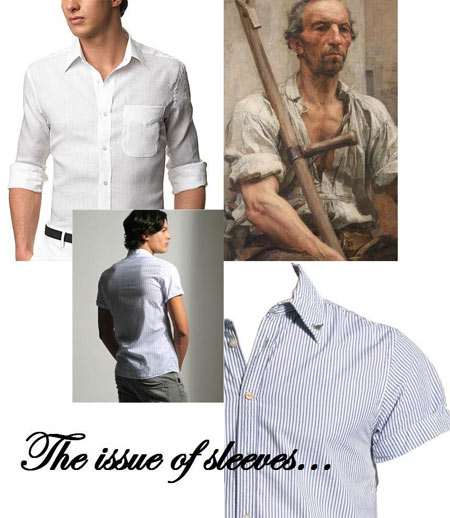 I have never been a great buyer of short sleeve shirts. I own a few, but I simply prefer long sleeves. Even taking very warm weather into account, I would prefer to roll my sleeves up. In an article that advocates the wearing of shorts, it might seem rather perplexing to the reader that I am not advancing the case for short sleeve shirts, but the simple fact of the matter is that I, personally, do not like them as much.

The question really is whether it is worth splashing out on short sleeved shirts for the summer or saving more than a few quid by surviving on adapting long sleeved shirts to summer wear. The point of short sleeved shirts is avoidance of excess material in times of warmth, but it really depends on your style persona. Whereas I am happy to fiddle around with shirt cuffs and sleeves, others might prefer to avoid the fuss.