There’s been a distinct upturn in temperature here in Tokyo over the past week or so, signalling the coming of the (often not so) rainy season and seemingly endless days of 30-degree temperatures and high humidity. Usually summer heat is mitigated by frosty blasts from office air conditioners, but this year is set to be somewhat different. March’s earthquake knocked out a considerable number of power stations that supply the Greater Tokyo area, meaning companies will have to turn off – or at least turn down – their air conditioners. It also means a lot of office workers may have to rethink their work attire.

The kind of sustained summer heat experienced by places like Tokyo came as something of a shock to the system for me. I grew up on the North Yorkshire coast, a place not renowned for its scorching summer weather, and learned the art of dressing seasonally pretty late in life. When people hear the words “summer clothing” it’s hard not to think of shorts, t shirts and sandals, none of which are appropriate for most offices. But it doesn’t have to be this way. Even before the planned reduction in air conditioner use I began to build a collection of summer work clothing that was light, cool and breathable. Here is my list of hot weather essentials based on a few years’ experience of summer in Tokyo*: 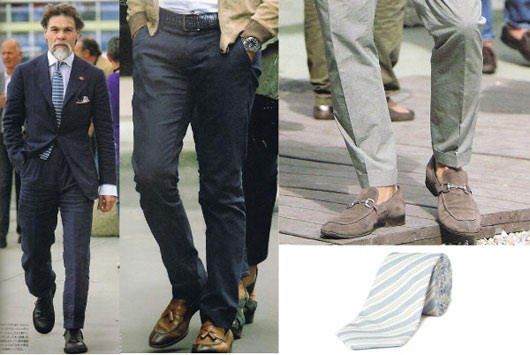 Linen suit
Yes they’re easily creased, but that’s all part of the linen suit’s charm. And, personally speaking, I think it’s far better to look cool and composed in a slightly rumpled linen suit than hot and sweaty in a crease-free woollen one. Khaki is the traditional go-to colour for linen suits, but I’m quite fond of a dark (not navy) blue and tobacco-coloured hues. Both look very elegant with a light blue shirt and knitted silk tie.

Cotton chinos
Chinos, khakis… whatever you call them, they’re a damn sight more comfortable in summer than wool-based trousers. Because they’re easily creased it’s important that cotton chinos fit well. Too baggy and they look like potato sacks; too tight and they look like well-filled sausage skins. You might want to have chinos break slightly higher than wool-based trousers, or, if you’re feeling particularly daring, have no break at all. This is because you’ll want to wear them with…

Suede loafers
Suede loafers were made for summer. Their uppers sit quite low on the top of the feet, which gives more freedom for your pegs to breathe. This isn’t something I took particular attention to in my first few years here, but I’ve noticed that my feet are markedly cooler and less sweaty in loafers than in lace ups. As for the socks/sockless debate, I’m tend to opt for lightweight silk socks in the early stages of summer, then switch to invisible socks when the temperatures soar. It’s not exactly conservative office dress, but when you’re walking on baking asphalt there’s nothing nicer than feeling the breeze against your ankles. I’ve heard a lot of people say that invisible socks often pop off the back of their ankles, and indeed they can do. I recommend Falke’s invisible socks, which have a few strips of silicone on the inside of the heel to stop this from happening.

Pique cotton shirts
Pique cotton is, according to Wikipedia at least, part of white tie. Apparently this is because it holds more starch than plain fabric and can therefore produce a stiffer shirt front. Needless to say, this is not the kind of shirt I have in mind here. I recently came across a number of shirts in United Arrows that are made from a similar kind of pique weave as a polo shirts. They’re definitely not for wearing with a tie, but are ideal for casual Fridays or very hot days when the sweat-wicking properties of the pique weave comes into its own.

Cotton/silk blend ties
Cotton or cotton/silk blend ties, to me at least, conjure up images of mint juleps on the veranda, seersucker suits and lazy July afternoons. I also think they’re great for situations where is a tie is required but the occasion isn’t uber-serious. Opt for light, neutral colours and occasional stripes.

*Some of you might be surprised to learn that this kind of attire is okay for corporate Japan, which is often stereotyped as a land of black-suit, black-shoe, white-shirt uniformity. Yes, there are a lot of people who wear this kind of stuff, even in summer, but it’s more to do with a lack of awareness than super-strict dress codes. Barring very traditional industries, such as finance, a lot of Japanese companies are moving towards being as relaxed as western ones when it comes to clothing. The need to conserve electricity this summer has helped to speed up this change. My company, for example, has no dress code that I know of, but most men tend to stick to what they know, ie, dark-coloured suits, because they don’t really want to think about what to wear. They might change their ways once the air con is set to 28 degrees.