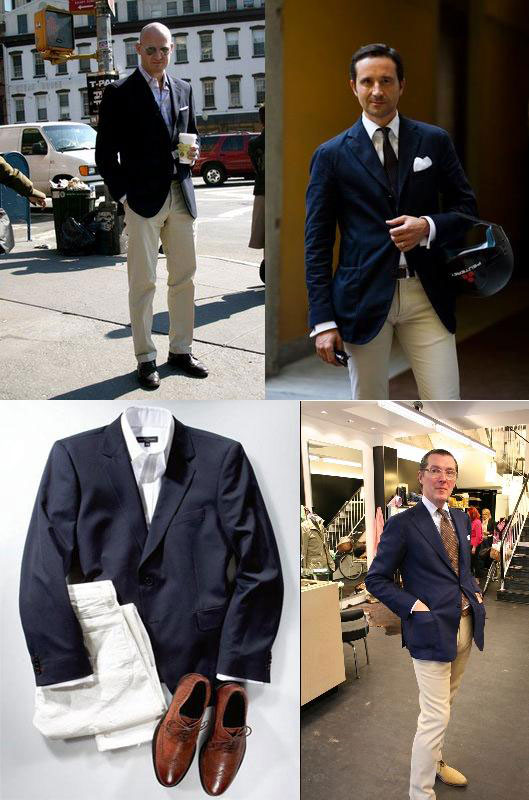 There are certain things that to me signify summer has arrived. The weather, obviously, is a pretty big one. But it really hits home when I start to see that favourite clothing combination of mine, the blue cotton jacket with white/off-white cotton trousers (read jeans and chinos). Whether you pick white or off white is, I believe, a matter of location. You’ll rarely see an Englishman in white trousers, whereas on the continent, in my experience, the reverse is so.

A look that seems at once both familiar and current, it is essentially a modern reinterpretation of the blue blazer and white flannels, which was the casual uniform of the yacht club, tennis club and seaside promenade of the 20’s and 30’s. As with its forbear it works by playing with contrast.

As I have mentioned before, I consider contrast an invaluable tool for pulling off the label ‘welled dressed’. In the case of the blue jacket and white/off-white trouser there are various contrasts at work. Firstly, there is the contrast of tone; and while at opposite ends of the spectrum they are in my view more sympathetic and less jarring to the eye than mere black and white combined. Both are cold, clinical colours, which sets up a contrast with the heat and dust of a city summer. There is also the contrast of the formal and the informal as represented by the sobriety of the blue jacket and sporting heritage of white trouser.

A look I adopt without fail, the garments combined have a versatility that belie their obvious simplicity. The base colours provide a perfect ground for almost any colour of shirting, and you can alter the relative formality by merely playing with the extremities. Combining these garments with suede loafers and a tie or pocket square and you’re suitable for an afternoon at Lords Cricket ground and dress down Friday. Alternatively, substitute the loafers for coloured Italian driving mocs and an open collar and you’ve covered alfresco lunches by the river.

The summer time wardrobe leaves me cold, but here is one look I have definitely warmed too.