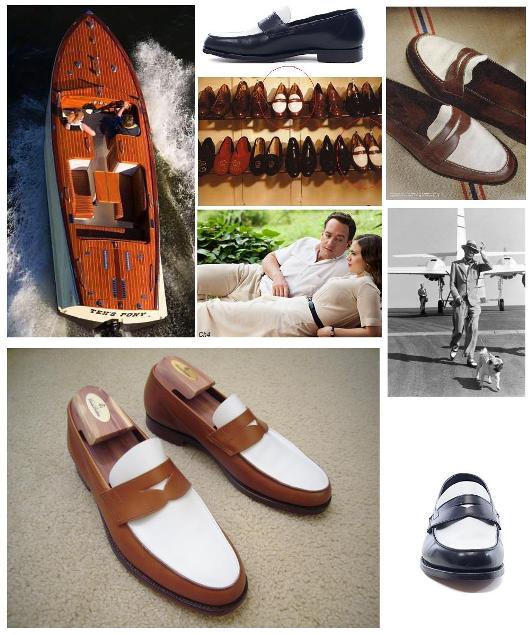 Away from the office my normal summer attire consists of chinos, white oxford button down shirts and deck shoes. Should I wish to dress these basic items up I simply add a navy, cotton, soft shoulder, buggy lined jacket.

On the one hand my choices are the pinnacle of simplicity, humdrum you might say. On the other hand, given the tatty t-shirt and shorts wearing age we inhabit, you could think of it as being relatively formal – it certainly is when I compare it to the majority of my friends and colleagues.

I have an image of summer style which, being weak to the forces of nostalgia, hovers around the idea of the 1930’s and the Riviera. Recognisable keystones of the look are off-white linen suits and trousers most commonly paired with a white shirt. Of course these elements are similar in tone – if not in material – to my current summer garb, which is in part why I wear them. But they do lack the sophistication which embodied the era.

The problem is that if I go down that 30s road too far I’m in danger of looking like an extra in search of a film set.

As much as I’ve admired this look, and the era, its formality is for the most part out of place in our own time, except perhaps in some work environments or the most formal of social occasions.

I’ve long held the view that one of the benchmarks of being considered ‘well dressed’ is the ability to dress appropriately to your age and your environment. It’s easy to admire men like the Duke of Windsor for their beautiful clothes and exquisite taste, but I often wonder how they’d fair now. Whether we like it or not we live in a very much more casual age.

Of course one shouldn’t dress for the satisfaction of other people, but I think the key is to carry over a sense of that era without necessarily replicating all the elements. To achieve this I’m looking to an item I’ve not yet mentioned, the two tone Penny Loafer. An item of footwear remembered for its association with the Duke of Windsor they embody the era. Rarely seen on the street – in fact I don’t think I’ve ever seen anybody wear a pair – worn with or without socks I think they’d set just the right tone and raise the game of my conservative summer wardrobe.

I’ve thought about them for several summers now, but lacked the courage of my convictions. This year they’re going on the list.