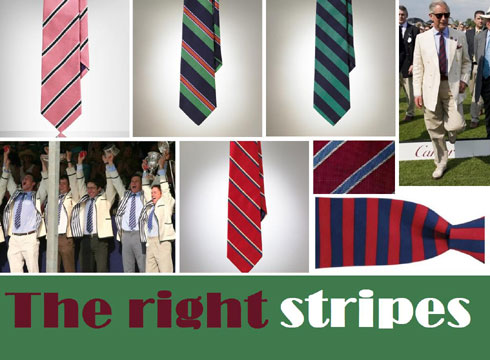 Summer is upon us. And though this means many gentlemen will be looking to shed clothing, some of the best ways to celebrate summer are by accessorising; belts, pocket squares and ties come to the fore in summer outfits. The candy pink handkerchief that looked so outrageous in January, suddenly looks essential in mid July. The Hermes-orange belt that prompted concerned faces in the winter rain turns admiring heads in the summer sun; letting the bijoux items in your accessories shine adds a special summertime character to otherwise rather regular ensembles. One of the most potent ways of exploiting the gaiety, the frivolity, the champagne-cork-pop levity of summer is by wearing striped ties. Stripes are fun indeed; they are the big top marquee, the straw boater band and the summer dress. And the bolder the better.

Of course, there is the sober, clubby and, if you like, stuffy side to striped ties. The members of the club; the Old School; the Oxbridge college men and the regiment. However, it is partly because of such associations that the striped tie is a sought after fashion accessory at all. It’s de rigeur to wear a striped tie at Henley, even if you think a boat club is a nightspot in St Tropez and, other old ‘season’ events like Wimbledon, Guards polo and the Lords Test Match have men of all ages bumbling along, sipping champagne and clapping ferociously – in a striped tie.

However, as my fellow contributor Simon Crompton pointed out in his article on shirt stripes – there are good stripes, and bad stripes. The ‘Islington Media Type’ shirt stripe is utterly passé. And, conveniently enough, so is the tie equivalent. The different width stripe works, but not in this illogical and overdone format. It works when there are fewer stripe colours and variations; there is more order, and it is pleasing, even soothing, to look at so calm a pattern. Some regimental ties have stripes such as this. The ‘Islington’ tie is however, a messy abomination.

I am not always a believer in the cliché that simpler is always better but when it comes to striped ties, I rather am. Four colours on a tie really are quite enough. Dark blue, green and red ties are the best backgrounds for paler stripes and the best combinations are navy and white, navy and red, navy and sky blue and navy and green – honest, simple and punchy ties that stand out from a distance.

As always, I am keen on promoting individualism. Most ties are of a diagonal stripe – which would be disastrous on a shirt, but is fine when confined to the narrowness of a tie. However, there are a few horizontally striped ties, with flat ends, that are around. They are generally of a knitted silk and are most often double-coloured. There is something slightly stagey, and even continental about the horizontal stripe tie; it was popular for a while in the 1930s and again in the 1950s and is now making another rather understated reappearance.