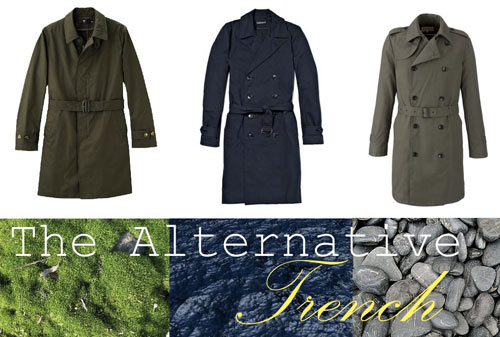 “You look like Inspector Gadget!” one friend cried as the other shuffled into his cream trench coat, flashing the Burberry check lining.

I always remembered this put-down as it reminded me of the frequent misfortune of iconic association; like those who hear Rossini’s William Tell Overture and think of ‘The Lone Ranger’ or those who point to my bow tie and say ‘Hey! Doctor Who!’ Some wardrobe items, when abused by popular culture, acquire a one-channel relevance for all those who were otherwise unaware. The trench coat is a piece of classic outerwear and one of the most practical methods of protecting our finely crafted suits from the persistent and uncaring elements. And yet, in its default colourings of buff, khaki or cream it can have an overtly theatrical and cliché effect.

This was a primary concern of a reader who wanted to know which colour of raincoat, besides the traditional, was most acceptable. Whilst I did spend some time in my response trying to convince him that the traditional colouring was still the most favourable as it would age better, I did concede that not all who look upon a long coat the colour of desert sand, with buttoned epaulettes and a buckled belt see Humphrey Bogart but rather, cartoonish ridicule. Speaking of which, the reader had already ruled out several colours for similar reasons; red (“I’m not Carmen San Diego either…”) black (“Black raincoats look too sinister”) and royal blue (“A friend has one…it’s way too attention seeking.”)

Though there are plenty of colours left, there are few that are suitable for a smart trench and I was dreading – with this reader’s reticence to experiment – that the choice was being pushed toward navy blue; the default tone for gentlemen of fear. There is no doubt that navy blue would be a smart alternative to the traditional tones, and is often better for gentlemen of fair complexion, but it was too hackneyed a second choice to recommend on its own, without other alternatives.

Moss green is not the first colour associated with rain coats, despite it’s associations with the trenches of the First World War which, unsurprisingly, is the reason for its nickname. It is a subtle green which is not horn-honkingly different to draw too much attention, and smart enough to adapt to elegant ensembles. One of the best things about a moss green coat is the wonderful contrast with various shades of blue – ideal for the classic navy suit enthusiast – as well as its compatibility with grey and brown.

However, against black, the moss green somehow loses its way; it dies against the lifelessness of the tone. Make way for the grey trench; apart from white, there are few tones which complement black better than grey. Monotone palettes might be, well, monotonous to some, but they are the smartest solution for those who favour colour-killing block black. In this circumstance, a black raincoat may indeed be too much, and there is no doubt that a navy would clash horrendously, but when our Reservoir Dog slips into a mid-grey belted mac, there will be nods of unexpected approval.