The Art Of Acting British 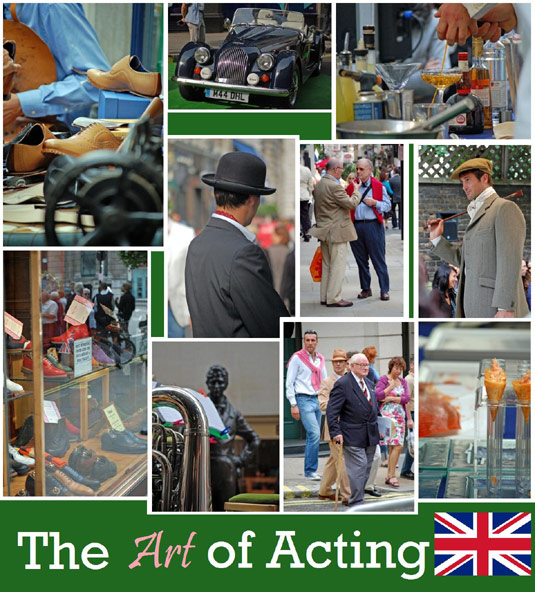 On the 4th September Jermyn Street, London’s shoe-and-shirt mecca, was closed to traffic. However, this was no ordinary inconvenience. The entire street had been taken over for the celebration of a particular Art; the Art of Being British. Many of the street’s retailers had set up stalls exhibiting their trade, trumpeting British values of quality. The Ritz Hotel occupied a large part of the Western end with their British chef creating and instructing on fine British cuisine and the Rivoli’s head bartender demonstrating the art of mixing a Ritz cocktail whilst their hotel car, a Rolls-Royce Phantom, boomed out ‘A Nightingale Sang in Berkeley Square’, a song which appropriately identifies celestial bodies as hotel diners.

A bandstand was set up by the statue of Beau Brummell at the entrance to the Piccadilly Arcade and musicians from the Royal Academy of Music (where else?) entertained the watching crowds with nostalgic and sprightly tunes. Paxton & Whitfield, proudly the smelliest shop in London, organised a slightly Wodehousian ‘Guess the weight of the cheddar’ competition; Barkers demonstrated the art of creating a shoe cutting and sewing leather in front of a silent audience; the Cavendish hotel organised a street-served hog roast which was so popular the queue snaked down the street in not one but two directions and a catwalk was set up in the middle of the street showing ensembles from the likes of TM Lewin, Beretta, Favourbrook, Daks and Hawes & Curtis.

Elsewhere along the street, Morgan cars gleamed in the September sunshine, Lewin’s attracted shoppers in to see their working seamstress and The St James Hotel served up some complimentary out-of-season Pimms. It was in confection as British as an imagination would dare and, acknowledging the special occasion, some of the crowd had taken the opportunity to exhibit their Art of being British. I say ‘being British’, when in fact I mean ‘acting British’; most of the fantastically, elegantly and colourfully dressed gentlemen there were not British at all yet they chose to mark the day in particularly British ensembles; tweed suits, fedoras, bow ties and even bowler hats. I heard Italian, American, Spanish and French visitors enjoying their promenade on this special day, attired in beautiful British classics. My fellow countrymen were largely anonymous.

You see, the trouble with the British is most of them are trying to be something else. They want to be Italian, or American or French. They’re either not comfortable with their nationality, or they secretly believe the grass is greener. Admittedly, the effect can be repeated elsewhere – Milan is full of men who see British tailoring as the pinnacle of elegance. But despite all the apparent British nationalism, our connection with Britishness, all the stuff that Jermyn Street was celebrating – that oaky, tweedy, burnished state of being – has become a museum in itself. Our citizens wander around in this world with a passive unconcern that suggests it no longer exists. Whereas those looking in on Britain see such things as worthy of protection and celebration, the curious Brits who peer in through the windows seemed to have lost all association with that world.