The Beauty of Vintage 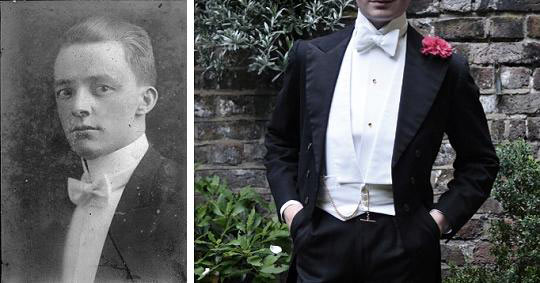 I attended a 1920s “Gatsby theme” party recently, thrown to celebrate a dear friend’s 30th birthday party. The scene was perfect; an oak panelled salon upstairs at Kettner’s in Soho, where the lights twinkled dimly through the hand-blown glass and the neo-gothic corniced ceiling recalled the extravagant drawing rooms of the Long Island mansions of the Gilded Age. The dress code, of course, was ‘Gatsby’, and I had decided to wear white tie (or for purists, ‘formal evening dress’). My ensemble consisted of a vintage tailcoat from the early 1920s, a pair of new barathea wool trousers, a white cotton waistcoat, stiff-fronted evening shirt (with amber studs), butterfly wing collar, black silk socks and patent pumps.

“That looks uncomfortable!” a jovial American (for my friend is a Bostonian) remarked, eyeing my high collar. “Not at all” I replied, quite truthfully. “Did you get that made up?” he continued, scanning my outfit up and down. “No, it’s a combination of vintage and ready-to-wear.” This language had him flummoxed. Considering the growing din and the encroaching awkwardness, I decided to lean in and simplify; “The tailcoat is a very old one, I bought it second-hand.” He looked perplexed by this statement, but then collected his thoughts and transmitted his understanding through a toothy smile. “So it’s not new?”

I decided two things that evening. One, to have a 30th birthday party of my own next February to commemorate the end of my own ‘roaring twenties’ and secondly that my vintage tailcoat, though not made for me and almost 100 years old, is probably the finest thing I own. Not only is it extraordinarily comfortable, it has an elegance that the years have not destroyed. I had slipped it on for the first time in a year, allowing its gorgeous weight to bear upon me and feel the novella-thick lapels between my fingers as I attached a pink carnation. I suddenly envisioned the original owner, standing in front of a mirror, tiredly attending to his own costume as a vinyl played through a gramophone.

“No” I responded “It’s not new, but it feels new. Especially on nights like this.” No tailor, however in sync with my tastes and my desires, could match this except by facsimile, and such a prospect fills me with coldness. It was shocking to some that I should wear something that others have worn before. However, it was more shocking to me that something so magnificent could be so readily available, and be so readily ignored. The artisan who had made my tailcoat is long dead. Artists, as we all know, are always more valued, and missed, after they are gone.