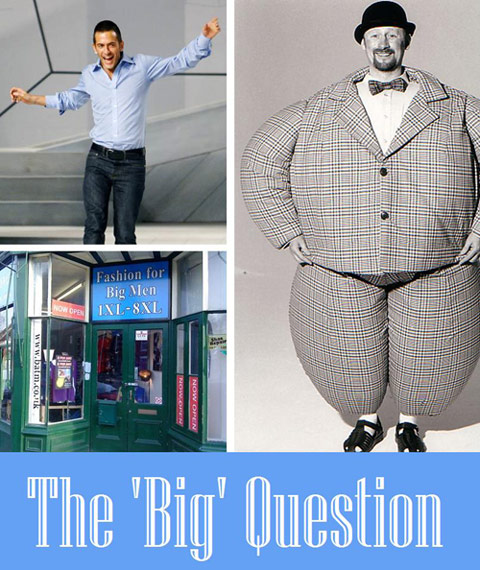 So fashion has relented and will now produce plus-size designs with Marc Jacobs leading the charge. I for one am not particularly surprised. For years, high-end clothiers have resisted the call, for decades they have turned a blind eye to a developed world only increasing in size and weight and for as long as they would now care to forget, they have avoided tapping into a potentially massive (no pun intended) market; considering most fashion labels are deep in debt, it was high time, the accountants warned, that they come up with a profitable idea.

Why, pray, does this concern the readers of Mensflair? Well, as little as it will affect the next few years of shirt buying or tailoring, the eventual knock-on effect of such a seismic shift in the fashion world will send shockwaves throughout the clothing retail world; other designers, except perhaps Karl Lagerfeld, will fall too. Fashion will change, and the way we look at clothing will change too.

For instance, designers will have to rethink style; designs that work on a skinny model do not work on a plus-size model. This affects both female and male design; the knock-on effect to fashion-conscious behemoths like H&M and Zara will be substantial. I think it possible that they will divide plus-size clothing from standard size clothing – take heed, all the chaps who said they couldn’t fit into “anything in that damned Spanish store.”

I also think it possible that outré fashion takes a back seat, with more variations on timeless style forming the foundation for fashion’s new audience; it may well be the death knell for outrageous couture, which is already exhibitionist PR designed to add credence to the fashion house concerned.

Many will be thinking “Big sizes? Big deal” and rightly so; anyone who sifts through the tail end of sales and reddens in fury at the proliferation of XXL and lack of a single Medium knows that ‘big’ chaps are not unfairly treated when it comes to fashion, they’re simply less interested. Vanity is the product of favour; it is more common in people who are of a more conventional size. Although in fairness, larger people have been excluded from the ‘ideals’ paraded by fashion, which is down mostly to the fact that they do not match the aesthetic ideal of fashion’s nonpareils, minutely because of the health risks of endorsing size – fashion PR would have you believe it is entirely the latter.

The question is, does this signal the end of the fashion world as we know it? Are those hallowed houses, constructed on the dubious foundations of anorexia, bulimia and Adobe Photoshop to come crashing down? As long as vanity multiplies at the rate it does, I doubt it. I see more of an evolutionary wisdom in fashion’s nod to this ‘growing’ market; they may not be scientists, but they see the divisions in humanity already forming, however slight they currently appear.