There is a brief scene in War of The Roses when Kathleen Turner wanders through her carefully and expensively assembled home, tweaking pillow cushions and rearranging ornaments, finding things to amend. She had the disconsolate demeanour of a person who has completed an enormous task and yet can find nothing better to do than survey the finished product.

Perfection is such a dissatisfying state. When we are without need of occupation we function poorly and indulge in self-gratification, hobbies to pass the time and excessive self-contemplation. It sounds pleasant to some, but I think the secret of a happier existence is realising the need to continually evolve; a perfectly decorated home will bring much smaller satisfaction than the memories that are shared in the process.

Three or four years ago, I doubt I would have considered a burgundy suit. I restricted myself to a conservative wardrobe of blues, greys and maybe the odd brown; supplying the strength of colour through shirts, ties and squares. However, after a recent conversation with a close friend and an examination of my collection – which is not small, but by no means is it large – I saw a sea of grey and blue which, much like Barbara Rose, caused me little satisfaction. However, instead of resorting to frustrated destruction, I decided to do the healthy thing and ‘evolve.’ 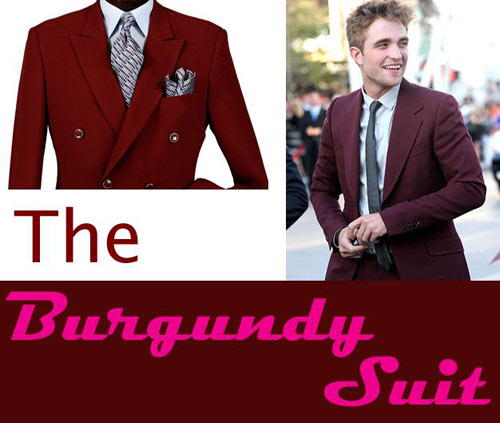 Burgundy suits are closely connected with the 1960s and 1970s, when young men broke away from the sober and sensible colours of their fathers’ generations and decided to adopt colours and styles that better represented a rejection of the social codes and expectations of a post-war world. The Beatles wore them with skinny ties, floppy hair and Chelsea boots, providing the world with a legendary aesthetic that has been rehashed and redone many times since. However, though it was in the age of the television that such sartorial extravagance first reached the masses, colourful suits were not unheard of in the decades before the war, particularly the 1930s and 40s.

It is this aesthetic of the suit that I decided to explore. The skinny suit is a trend and though acceptable for tween-idols like Robert Pattinson, for a man in my stage of life, it is just a little too rock star, a little too young: TopMan, I will not need your services in this regard. As the colour of the suit is the star, it is likely that I would not plump for unusual details or ornamental buttons; a peak lapel single breasted two-button jacket with a single breasted waistcoat seemed the right sort of solution. The partnerships I pictured with such a suit sent my imagination into overdrive; I saw a French blue shirt with an orange and navy tartan tie; a pink shirt with a white polka dot navy knit; I saw chestnut shoes and green squares, yellow socks and brown gloves. An orgy of colour.