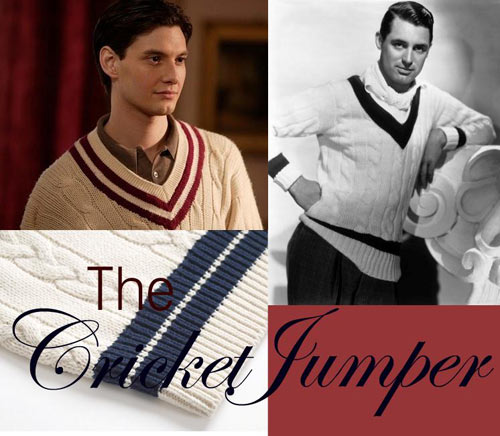 Spring has most definitely sprung: though the trees are bare, the ladies legs are too.

It was 20 degrees at the weekend. People were lounging in the parks, seeking ice creams and shade. The snows of February seem impossible on such days. As undressed as Mother Nature still is, Spring’s Opening Party has already happened. However, as is often the case, the over eager tend to run before walking. Instead of dressing for a warm spring day, people were dressed for an August Bank Holiday.

While it was certainly warm enough at midday for such a sartorial ‘light touch’, by five o clock in the evening – when many were standing outside public houses, absorbing the last of the sun’s rays – it had ceased to be sufficiently balmy and after the sun had disappeared, it became distinctly chilly. The perfect weather, I thought, for the cricket jumper.

As an item of ‘sportswear’, purists consider that cricket jumpers are not considered appropriate for a gentleman, unless he should happen to be coerced to participate in a charity match on the village green or, if so required, to keep him warm before the next mixed doubles. However, I am not a purist; I happen to think that cricket jumpers are one of the most useful items in the spring wardrobe.

The most common design of cricket jumper includes a coloured chevron; the original purpose of this was, and still is, to denote the cricket club of the wearer. However, most of the fashion designs seen today have little relevance to any particular cricket team; Ralph Lauren often produces a ‘neutral’ chevron design of navy blue, but be sure to get one without the ubiquitous Polo embroidered logo.

It is possible to get plain cricket jumpers – without the coloured chevron – although these are rarer and sometimes have to be resourced in school outfitters. This design, though undoubtedly more subtle, lends a more aristocratic feel to the jumper – think Anthony Andrews as Lord Sebastian Flyte – and the lack of a multi-colour punctuation on the v-neck means it is ever so slightly more adaptable.

Worn with a pair of khaki or cream chinos, a creamy white shirt and a pair of chestnut brogues, a gentleman will look the picture of the season. However, the jumper will also smarten up a casual ensemble – jeans and deck shoes – far better than a generic sweatshirt and will add a sporty dynamic that a professorial cardigan could never muster.