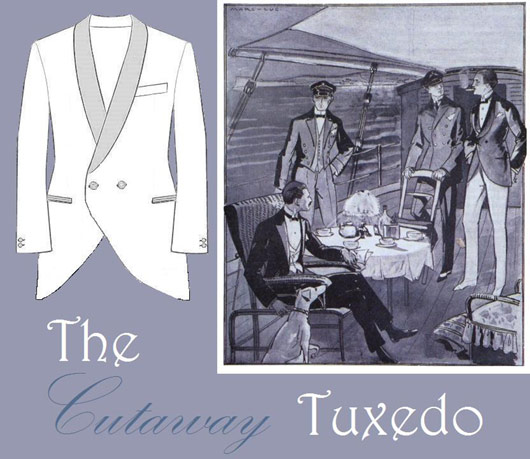 Recently browsing a collection of vintage sartorial illustrations, I was caught by an interesting and attractive ‘suggestion’; the scene (pictured above) is the deck of some vacation steamer or private yacht, two gentlemen in evening clothes are about to settle down to a pre or post-prandial beverage. One gentleman has already placed himself in a wicker armchair by a laid table, a hound at his side. The other stands in wait as the crew ready his chair; white shoed and trousered, he wears a double-breasted shawl collared dinner jacket with an attractive equestrian-style cutaway. It is an instantly arresting style; partly because it is unusual but also because it is an approach that worked so distractingly well.

Double breasted dinner jackets are appealing to me, but I was always concerned that they looked slightly too conventional – a black version of a day suit – to be something worthy of ‘evening dress.’ Secondly, the single breasted peaked or shawl lapels, though handsome with a waistcoat, are also rather ordinary and too similar to their daywear cousins in shape and style. This jacket design is fabulous; the proportions are perfect and it is completely idiosyncratic. The cutaway is the defining thing; were it merely a two button double-breasted shawl-collared evening jacket it would be simply unusual. As a cutaway jacket it is unique.

Naturally when one salivates over such items of beauty, it is important to be rational. There is no doubt a tailor could, and would, make such an item. They might choke a little in surprise, and shake their head in dismay as you summarily dismiss the house-styles, but it isn’t a pattern offensive to tailoring. However, should they be ballsy and sufficiently opinionated, they might suggest a couple of reasons why it should not be made:

(a) “The only reason it looks good is ‘cause he’s wearing it with white trousers.”

This is a good point. The argument being that the scalloped look works best when a contrasting colour is involved. Most gentlemen will wear trousers of the same colour and the effect of the cutaway jacket will not be quite the same.

The jacket is of such a design that, worn open, it would look floppy and inelegant. It could only be worn buttoned. For some, this is not a problem as they would only seek to present an aesthetic ideal. Others prefer functionality in their clothing, however beautiful it is, and would shirk from spending money on bespoke for something that can only be worn one way.

Despite these protestations of our hypothetical tailor, personally I think it is splendid. I concede that with matching trousers, the jacket would not have quite the effect it has in the picture and that we are talking about a drawing of pen and ink, not a manufactured example. However, though the cutaway is the clincher, it has other qualities which recommend it as an option for a discerning gentleman; double breasted shawl collars are uncommon, particularly with two buttons, and it has a relaxed, smoking-jacket profile. It might not fully replace the three-piece tuxedo but for something different? For a really interesting item of design and individuality that still manages to conform to the regulations of evening dress? It deserves consideration.