The Dandies Of The NBA 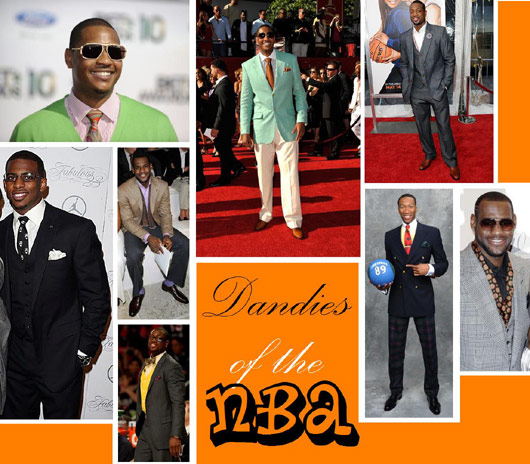 Basketball is not a sport I associate with dandyism. In fact, it is not a sport I associate with much at all, though that is not for want of trying. My memories of playing basketball at school are rather unhappy ones. Not exactly of ideal stature, I was enthusiastic but was invariably subjected to that terrible, psychologically injurious humiliation of being among the last in team selection. Outside of school, basketball was not really a sport other British children seemed keen on. I remember being alone, bouncing my tomato-red Chicago Bulls ball (a birthday present) disconsolately outside during holidays, attempting three pointers. As far as the sport was concerned, that was as far as I went – my interest gradually waned, I picked up other hobbies and my bright red ball steadily deflated and dusted in the garage.

I happened to be trawling Mxolisi Ngonelo’s blog when I discovered his coverage of NBA style which inspired me to research what turned out to be a trove of dandily dressed, assured and stylish young athletes. I was rather taken aback. Most English sportsmen dress appallingly. There are exceptions, but the majority of the stars in the sporting galaxy look better in their nylon kit than they do at some off-duty shindig. Footballers are notoriously badly dressed; though many of them are multi-millionaires, fathers and husbands they dress like unemployed and insecure university dropouts. The NBA dandies are the direct opposite. Clever with colour and texture and refreshingly elegant in cut, they put other sportsmen in the shade.

Miami Heat’s LeBron James uses subtle palettes, stylish tailoring and tasteful accessorising to create his more-than-just-smart looks. Likewise New Orleans Hornets point guarder Chris Paul, who artfully stuffs his squares into his breast pocket, dandifies his looks with waistcoats and well-tied ties. Carmelo ‘Melo’ Anthony of the Denver Nuggets splashes colour with aplomb and originality and twenty-three year old Wes Johnson, drafted into the Minnesota Timberwolves only this year, nevertheless presented himself at the draft in one of the most mature yet vibrant ensembles of all; a brass buttoned double-breasted blazer, yellow shirt, red patterned tie, tie clip, plaid trousers and green pocket square.

My favourite of the NBA dandies simply has to be Dwayne Wade, known as D Wade, who also bounces balls for the Miami Heat. Colour, fit, accessories, variation; the man has it all, delivering juicy, elegant and undeniably attractive ensembles with composure. And he has the accolades to prove it, being named as the NBA’s best dressed player by GQ in 2006 and in 2006 and 2007 making it to number four in Esquire’s Best Dressed Man in the World awards. Of course, there is as much ‘street’ as ‘neat’ to the NBA and hoodies are as prevalent as Hermes, but these players provide the perfect example of elegance to aspiring athletes wishing to make it in this game or any other; these men evidently enjoy their clothes as much as they appear to enjoy their sport. Bravo! The dandies of the NBA.