The Dandy is Back

Dandies, according to the most recent publication of L’Uomo Vogue, are back. In fact, the Italian men’s fashion bible is so confident of their return and their reinstatement at the upper end of fashionable society that they devoted nearly an entire 450 page issue to the dandy renaissance; Robert Downey Jr was pictured larking around in cravats, monocles and top hats, Matthias Schweighöfer in dandific and bizarre ensembles and positions at a verging-on-seedy outdoor location and even Zinedine Zidane managed to look genteel and overtly elegant in a velvet evening jacket with an enormous bow tie.

Dandies fell out of favour in the twentieth century. After the excess of the 1890s, the frightful and catastrophic Great War and the gradual rise of the simply-attired proletariat, sympathy and celebration of dandified men had begun to wane. King Edward VIII, the Duke of Windsor post abdication, was the ‘last gasp’ of the Establishment dandy-world. A century after the demise of one of the most fashion conscious and great spending monarchs, George IV – a man who relied on the sartorial advice of the dandy of dandies, Beau Brummell – it seemed the world had had enough of a style that seemed at odds with the concerns and ideals of the future. Throughout much of the twentieth century, the dandy was an awkward and often ridiculed figure – a man who dwelled, unhappily or happily, in the underworld of the planet’s great cities.

The tenor of this collection of articles appeared to be a celebration of dandies; a coup of marketing that sold the concept to a wider, fashion-driven audience. Despite this apparent comprehensiveness, one might read all 450 (or make that 150 – advertisements you know…) pages of this bulky volume and not be any clearer about what a dandy actually is.

Some people regard flowery, effete gentlemen who adopt bright and extremely decorative clothing as dandies; others disagree and opt for the fastidious and immaculately attired. And others suggest that a modernity, through an acknowledgment of fashions and a revolutionary creativity, is the true mark of the dandy. None of them, and yet all of them, are correct.

Dandies are fortunately free from the constraints of pigeon-holing; an inelegant and unnecessary practice. Since dandyism relies on creativity and evolution, many would align with the maxim that to define is to limit. In any case, a ‘dandy’ desirous of being referred to as such is rarely anything other than a poseur. 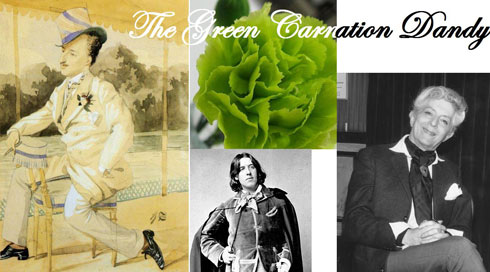 The Green Carnation Dandy is a relic of the late Victorian era; an era of monumental wealth and near-Roman excess. Art is at the centre of this Dandy’s world. As Coward’s brilliant lyric from Bitter Sweet explains; “We believe in Art, Though we’re poles apart From the fools that are thrilled by Greuze. We like Beardsley and Green Chartreuse.” The Green Carnation Dandy is to some rather like a fop sartorially, but for the cultivation of his poetic language and refined speech. Anthony Blanche adopted waterfall pocket squares, extravagant bow ties and striped jackets in the manner of a Macaroni, but his beautiful manners and personal refinements suggested dandyism. Likewise Oscar Wilde, who would often dress in outrageous fashions suggesting an utter rejection of the Beau’s code of a dandy: that a well-dressed man should not be noticed. The magnificent flamboyance of this Dandy is utterly conspicuous; he is very likely to use words merely for pleasant effect. 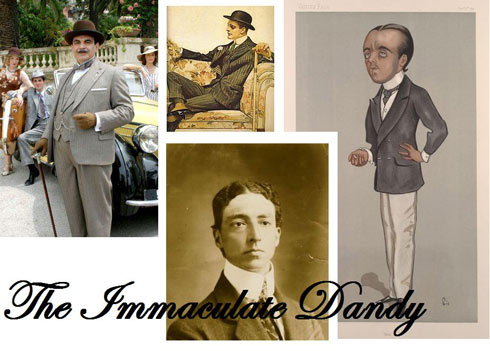 The one Dandy who follows the Beau’s lead rather more closely is the Immaculate. An apt description as he does appear, when fully dressed, utterly untouched and almost waxwork in manifestation. Hercule Poirot and Andrea Sperelli are excellent examples of this type; the very picture of an intimidating personification of symmetry. Exquisitely tied bows and ties, flawlessly starched shirts and shoes ‘shined to reflection.’ Empirically, he would always be considered, at the very least, well-dressed. Modern proponents of this style do tend to remain faithful to classic, and often archaic, items of dress. Art is certainly important to the Immaculate but fashion is usually irrelevant. Decoration is rather more controlled than that of the Green Carnation Dandy and usually more discreet. 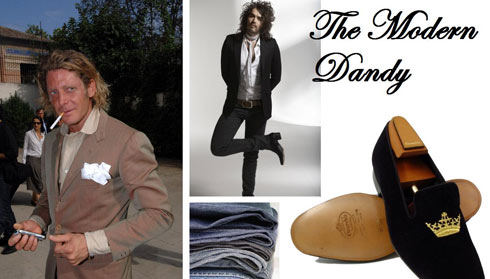 The Modern Dandy is very likely to be the personification of a smartly dressed follower of fashion; unlike the Immaculate, the Modern will consider and favour trends. Where the Green Carnation Dandy adopts a velvet jacket, buttonhole and silk cravat, and the Immaculate a starched shirt, bow tie and 1930’s suit, the Modern might opt for skinny denim with initialled slippers, and an unbuttoned Byronic white linen shirt with a smoking jacket. The juxtaposition of different styles, and different periods, is simply not an issue for the Modern. He likes taking risks and enjoys the success of his experimentation. Lapo Elkann, whose undeniable creativity has produced some fabulous and peculiar results, is the paradigm of this type.