Are there any two more powerful words you can place on an invitation?

The stipulation is so complete, so final and so gently authoritative. It hits like a steel fist in a velvet glove: there will be no relenting, there is no relaxation – this is a rule.

I have always thought of Black Tie as being the closest thing civilian citizens get to a military parade. Though thought of as “fancy” or “dandy” clothing, Black Tie (or tuxedos/evening dress) is actually the simplest and least-showy form of male clothing in the pantheon of classic menswear.

Yes, it is formal. But formal doesn’t necessarily mean decorativeness or extravagance. Day suits such as loud Glen Checks are far more distracting and exuberant in their elegance; silk ties with paisley motifs in colours like marmalade and plum, far richer and gaudy.

It is the discreet elegance of Black Tie that makes it the smartest form of dress, and it is the uniformity of its expectation that makes it harder to distinguish oneself.

It is easier to make a splash of difference in a day suit. For example, odd waistcoats can add an element of intrigue to a dull, dark suit; bright pocket squares can be deployed as foils to plain neckties – and brightly coloured shirts can distract from otherwise conservative ensembles.

Black Tie is monochromatic and sartorially severe. When a man tries to play around with it too much, it comes off as foppish. When he looks to add a hint of colour he must be wary. Black Tie is very simple – but it’s remarkably easy to get it wrong.

And so, with the ‘parade’ of Black Tie, one must impress with the details. Patent or very well polished black shoes – ideally opera pumps or Oxfords – should shine on your feet. The bow tie (always black) should be subtly textured (moiré silk is particularly fine) and the quality and condition of your evening shirt, with a greater amount of exposure in the chest, needs to be high. Even socks need special thought; black silk should be the first choice, but even if selecting cotton a man needs to pay special attention to the condition and thickness of his hosiery.

However, the most important element of Black Tie is the most obvious; the dinner suit itself.

The perfect dinner suit is an investment. It doesn’t have the regularity of use of a grey chalkstripe or a navy worsted, but to have a bespoke version in your arsenal offers a sublime peace of mind. It will last a lifetime – and beyond, if taken care of. I have a vintage white tie tailcoat, made on Savile Row in the 1920s, that is in excellent condition; in fit, it’s not perfect as it wasn’t made for me, but the exquisite craftsmanship and condition of the garment shows how it is worth the initial outlay.

On a street that is simply bursting with archives and patterns of famous and celebrated clients, Henry Poole is probably the most storied of the Savile Row tailors. Virtually all of the 19th and 20th century tailors can boast celebrities, authors, aristocrats, sportsmen, musicians and artists in their ledgers but Poole takes it up a level; it has the silver screen stars, but its most illustrious clients are its royal ones.

The Prince of Wales, later Edward VII, is credited with ‘inventing’ the dinner suit’s short jacket, but it was Henry Poole who made it – and it was Poole’s creations that were later popularized amongst American patrons who frequented New York’s Tuxedo Club.

What this means is that Poole has the ultimate bragging rights over the dinner suit – and that when anyone from Poole speaks to you about Black Tie, it’s probably sensible to listen. 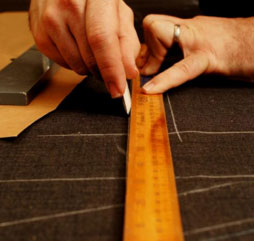 Henry Poole and London Craft Week are inviting those who possess this sense, and a mere £15+VAT, to their grand rooms on Savile Row to see how one of their dinner suits, the ‘godliest’ of all, are made.

At 11.00am and 3.00pm on Thursday 5th May, Poole are offering a rare chance to see demonstrations of different processes from tailors Keith Levett and Tom Pendry alongside Henry Poole’s archives and pattern books – almost worth the entrance alone.

Places are limited, and tickets are available here now.