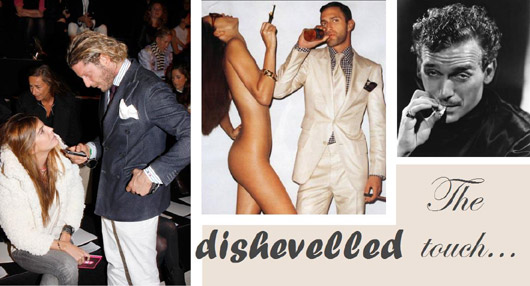 Tom Ford once said that a man should never appear completely perfect. There should always be, he contends, something slightly out of kilter, something vaguely inconsistent about him. Ford’s trademark stubble is testament to this; though immaculately attired his personal grooming, while not excessively untidy, is certainly imperfect. Ford considers that this adds a good deal of welcome sexuality to ensembles that would otherwise be considered, objectively, a trifle musty.

Consider this; velvet bow ties are normally the domain of lecherous sexagenarians. That association needs to be expunged successfully. Clean shaven models looking wanly into the distance, tight lipped and utterly rigid may look like living Adoni but they do little to brush off the image of the bum-squeezing Negroni-drinking elderly bachelor. Their placidity is instantly forgettable. What you need to do is to introduce a new sexuality to the image; cue a high-cheekboned, stubble faced Lothario with a beer bottle and cigar in hand, a nude woman puffing from a cigarette by his side, a pocket square carelessly stuffed in his top pocket: a cocktail of masculinity in a single shot.

Being subtly dishevelled is not a matter of being unkempt. Untucking shirts, wearing trousers in a slovenly manner or intentionally scuffing shoes is brazenly untidy. The key is to use small touches to convey a breezy loucheness; the hastily turned up trouser, the overflowing pocket square, the wonky tie-clip. Importantly, one has to adopt the correct frame of mind – a fake is so easy to spot as, floppy as their manufactured sartorial nonchalance might be, their mannerisms remain starched. The art is not to take oneself so seriously; avoid straightening things too much, create habit but do not perfect.

Eventually, the clockwork of dressing leads to a sense of being underawed by what is seen in the mirror. The Italians call this sort of thing sprezzatura which some say is merely a talent. I happen to think it is a result of custom; do something regularly enough and you perform it well, but languorously. The nudity of a top pocket is too startling but the concern about how big it is, what shape it is, even where it is loses its appeal; the pocket is stuffed carelessly, the gentleman takes one look in the mirror before he goes and, crucially, touches nothing at all. There is no shortcut. Like all good things, it takes time.