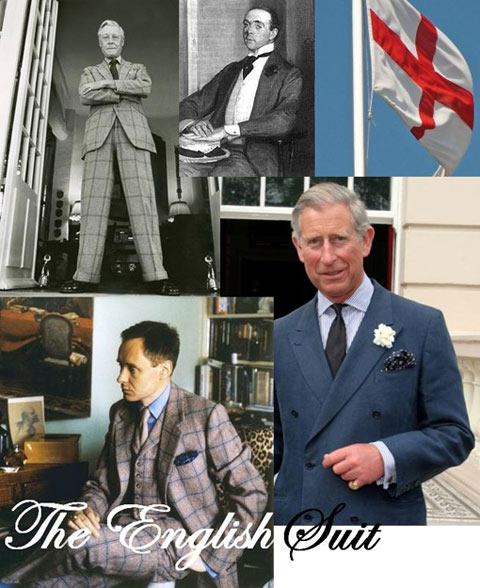 Many moons ago in the late autumn glow of October, I wrote, at length, of suits. Readers that recall my musings might have noticed that, though I paid small reference to the English suit, my focus was on the alternatives; the Continental, the Gangster and the Italian. Any at-length discussion of the English style was intentionally avoided as I believed, and still do, that the English rather overdo it when it comes to blowing their own sartorial trumpets.

Therefore, I conspicuously avoided ‘the English style’; it was the moment for xenophilia, for diplomatic acknowledgment and cultural appreciation. However, I had always intended to celebrate both the English style and the very Englishness of wearing a suit in the first place. And this celebration had to occur separate from the appreciation of other suiting styles to avoid implicative competition and what might have been seen as sartorial jingoism. For though I believe that too few Englishmen dress to the standard of our boasts, the daring and the individuality of an Englishman in an English suit can intimidating.

To look exceptionally, unmistakably English in a suit (sorry Nicola, but we don’t do kilts) requires three things; the right pattern and style of suit, the appropriate accessories and the correct attitude.

English suits are not generic suits; to master the English suit style requires an adoption and tolerance of patterns. The English do dress in plain worsted but it isn’t the signature. Think of John Steed or the Duke of Windsor: the Englishman always errs on the side of eccentricity.Therefore, stripes and checks. And the stronger the better.

Next, the fabric should be weighty – for the unreliable English climate; nothing really below 280 gsm will do. Go for heavy flannels or worsteds above 300 gsm.

English suit is tailored to sit relatively close to the body with the high-waisted trousers and high jacket arm holes.

The suit should ideally be cut with a caricature of Englishness in mind. The most English look is probably a double-breasted windowpane check or chalk stripe. For those who favour the single-breasted style, mid-width peak lapels should replace the more Italian notch. Dual vents and flap pockets are common characteristic of an English suit.

Next, your accessories should also convey Englishness. The pocket square, in subtly patterned silk, should almost be an anchor-point. Burgundy, dark green, dark blue and grey are very English backgrounds. The English shirt is all about the collar, which should be semi or full cutaway; no button-downs (American) or pin-collars (too gangster). Finally, the tie should really be either a knit tie or a woollen tie in a plain colour or with a conservative pattern like polka dots. Shiny ties belong in Las Vegas and loud patterns at Pitti.

The English suit should be worn with an air of happy diffidence. Though proud, the Englishman in a suit never conveys this through deportment. He can be solemn at times, but he should attempt to be of good cheer in both business and pleasure and never take himself too seriously.

In contemporary London, the English suit is rarely seen. This may sound bizarre and paradoxical but it is purely a reflection of how the suit itself has evolved and how the English tastes have changed.

For when I refer to the English suit, I do not mean merely a suit purchased at a gent’s outfitter; nor do I necessarily refer to grand threads from Savile Row. A suit’s ‘Englishness’ to me has a great, great deal to do with choice of material, colour and pattern and character.

The typical lawyer will march down Chancery Lane in an Italo-English bastardization; for many of the suits I see are the product of an ill considered pairing of these two great ‘schools’ of suit; Italian weights of cloth dazzle uncomfortably in pinstripes. However, for the most part, this is as English as you will see in central London. Aside from the habitats of St James’ and Mayfair where you are very likely to see, if you wait long enough, the true English suit in all its glory, London is sartorially breathtakingly cosmopolitan. However, to celebrate is not to wallow in demise and dilution. And as an Englishman, I am too awfully fond of purity; the ‘pure breed’ English suit, though rare, is as heart-warming as a gill of gin.

Perhaps it is the timeless and charming Georgian sash window, or the tartan traditions of our Scottish cousins that has inspired, but checking a suit has long appealed to the English.

Author Nick Foulkes, pictured in first picture of the article (bottom, left) sports an unusual but very English check suit. The strength and the size of the check are particularly distinctive and this is sometimes referred to as ‘a window check.’ Edward VIII, or the Duke of Windsor as he came to be called after his abdication, is also wearing this check (top, left) although he was more famous for wearing the Prince of Wales check of which the current incumbent of that title, Charles, is so fond.

Checked suits, though often worn in the country, are rarely seen in town. The colour matched socks, shirt and pocket square, demonstrated by Foulkes, are the only accessorising required. Choosing as subtle a shirt and tie as possible is recommended; the suit itself will always be the talking point.

The little bit of England

The story of England is proof in itself that something small need not necessarily be insignificant or ineffective. Though I greatly admire Charles’ suit (bottom, right); again, a very English affectation of wearing double breasted suits, it is the small things about his ensemble that make me think of green hills, dreaming spires, Cornish cream and the sound of leather ‘gainst wood.

The Bengal stripe shirt, with the spread collar, the sober tie with the small knot and the casually inserted and, (please note) patterned pocket square are rarely seen on the continent. Italians generally prefer ironed linen for pocket squares and, unless they are conspicuously Anglophilic, usually wear plain white. Similarly, large knots are popular with gentleman who dress in the Italian mode – completely at odds with the Lilliputian creations of Charles and other men who pace along Pall Mall.

The buttonhole is particularly English. When I have worn them on the continent I receive either knowing nods of sympathy or furtive untrusting stares; sadly they are seen infrequently although a well made one, as Oscar Wilde said, ‘is the only link between Art and nature.’ Overall the additions are not excessive or cluttered. Though buttonholes and pocket squares are considered to be the clothing equivalent of Victoriana, they actually create a gentle balance – something breaking the monotony of the suit fabric.

With Charles there is a subtly muted starchiness; the hard collar and ruthlessly secured tie are the modern equivalent of Beerbohm’s high winged collar and pinned tie. Though it might be unfairly referred to as a ‘stiffness’ by contemporary society, in my opinion it retains the correct level of formality and finish. This particular ‘Englishness’ is as old as the hills. Never frightened of, or strangers to progress, the English, generally speaking, still like to maintain a level of dignity that, ironically, actually makes them feel more comfortable.