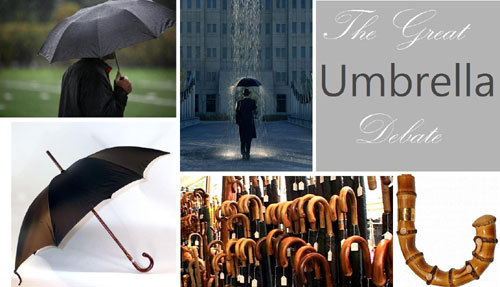 Of all the great inventions, for the man of style the umbrella ranks as one of the most important. It protects him and his treasured clothes from all forms of beastly precipitation; from the dreary drizzle of the British Isles to the torrential downpours in the subtropical metropolis. The umbrella is the most crucial ally of the stylish boulevardier. I remember some absurd commentary in a free and rather poorly compiled newspaper criticising the ‘wimpy blokes’ who ‘hide’ under these ‘feminine contraptions’ for, as they confidently stated, ‘it’s only water – you’ll dry eventually.’ I don’t really know exactly what sort of reaction this commentator was hoping for but I would imagine they’d wished for a revolution of some sort and would have been rather excited to see perfectly usable umbrellas dumped and burned, their former owners standing in the rain, heads turned to the heavens grinning beatifically in their ‘release.’

Unfortunately, this plea fell on deaf ears. Umbrellas are still in use. From the minnow foldaways to the giant golf umbrellas which are nearly always carried by rather superior looking middle aged gentlemen and which, on the narrow pavements of the city, look rather ridiculous; like a whale attempting to navigate the Avon. However, the clear advantage of the larger brolly is that more of your person is protected from the rain; the larger the canopy, the greater the guard. Despite their rather bloated and inconvenient size, this makes such umbrellas appealing. The small, collapsible umbrella, while seemingly ingenious (‘Look, it fits right into my briefcase!’) is only a friend to the head and shoulders. Since most rain does not fall with perfect verticality, a small canopy will only protect your upper torso.

Many I meet whilst in possession of my whangee handled stick brolly look at it in paternalistic amusement; they mumble something about the risk of leaving it somewhere and mention, with a degree of self-satisfaction, that they just have a ‘bag brolly.’ I tell those who insist on continued examination that I have possessed the same umbrella for a number of years and that as I walk a great deal around the metropolis, I require a strong mechanism with a large canopy. From their responses, I often elicit a smugness that suggests that they feel rather sorry for me in carrying such an inconvenient object whenever the leaden skies suggest rain; the reason being that their inconvenience is comparatively small – and, importantly, concealed when not in use.

Despite these evident concerns, my style of umbrella – commonly referred to as the City umbrella – is the only form of umbrella I would carry. It is no wonder that smarter versions of it are named ‘Gents Umbrella’ or ‘Diplomat’ as it is certainly more polite than the rather anti-social golf umbrella, and undoubtedly more protective of one’s sartorial elegance than the foldaway. It is larger, yes, and you cannot carry it in a bag, but is that really so awful? I like having to carry it by the bamboo crook on my amblings around town. It’s a piece to be proud of and contrary to popular belief, I think it is easier to mislay a smaller, less significant umbrella; after walks in the rain, I leave it unfastened, dripping on the back of a chair. No matter how many ales I imbibe, it’s still evident to me as I rise to leave. In contrast, the little bag brolly, which still requires drip-time and cannot be placed back into one’s bag until completely dry, is so insignificant and so diminutive it is unsurprising that so many are found under tables, on train seats and in the bulging lost property hold of public transport offices.