The Influence Of American Presidential Style 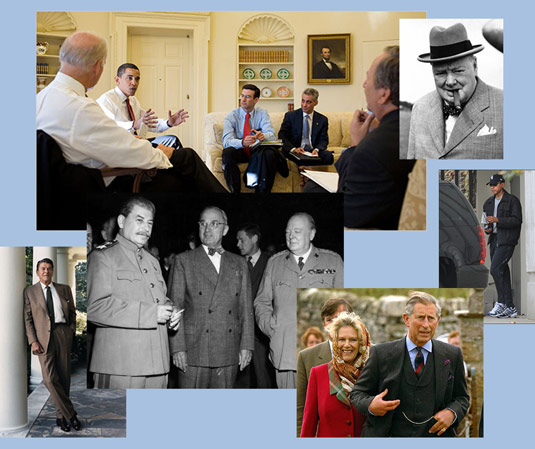 I wish the leader of the free world would take the opportunity to also be a leader in style. The past few U.S. Presidents have all adhered to the American political uniform: dark suit, white shirt and typically a light blue tie. There is nothing particularly wrong with that look, except that it is painfully boring. Esquire has previously named President Obama one of the best dressed men in the world. I honestly don’t see it.

U.S Presidents have not always been so sartorially boring. Former haberdasher Harry S. Truman sported double-breasted suits, Stetson hats and spectator shoes; his contemporary Winston Churchill was also incredibly stylish. JFK has been blamed for killing the hat, but at least he had an influence on the nation’s style consciousness. Ronald Reagan, the dandy from Hollywood, is credited with reviving the popularity of the brown suit. He was not afraid to indulge his passion for clothing. Consider this article from the June 28, 1982, issue of Time magazine:

Not since John Kennedy posed boldly in a two-button coat, defying decades of three-button tradition, has a suit of clothes gained such worldwide attention as the blue-and-gray glen plaid outfit that Ronald Reagan wore to Europe. It jangled the eyes of television producers on two continents and offended the artistic sensibilities of still cameramen. “Can’t you get him out of that suit” pleaded one photographer. White House aides feared that it had the whiff of the $2 window at a race track. Foreign functionaries, noting the swaths of plain blue and gray cloaking the ample figures of the other summiteers, looked politely pained when they saw Reagan’s cheery plaid clashing with a red carpet or the faded elegance of Versailles.

When the folks back home opened up their magazines to pictures of the summit, the Reagan suit hit them in the eye like an errant thumb. One reader phoned Washington to ask if the suit had deeper diplomatic significance. Cocktail parties on both coasts pondered Reagan’s sartorial splendor.

The American fashion industry rallied to the President’s defense. “It’s a credit to his imagination,” claimed Jack Haber, editor of Gentlemen’s Quarterly. “It was not a sore-thumb kind of plaid. It was a beautifully tailored suit, a muted plaid.” John Fairchild, Women’s Wear Daily publisher, seconded the thought: “Good for him. The President didn’t look like a stuffy old goat. There’s some sunshine, some California in that suit.”

The suit, believe it or not, became a subject at last week’s White House issues luncheon held by Reagan with his principal aides. Normal fare for the august assemblage is the federal budget with a sprinkling of SALT II. Just how the glen plaid came up is not clear. But Reagan was heard to proclaim, “I like that suit.” Whereupon he explained that months ago he had cautiously worn the suit to test how it photographed. “It only could have looked good in stills,” joked one aide. No, the President replied, he thought it went well on television, so he wore it often.

Reagan’s glen plaid has good lineage. The fabric was manufactured by the British firm of Illingworth, Morris & Co. Ltd., which also furnished the interiors of Rolls Royce autos, the Pope’s vestments and the covers for the tennis balls used at Wimbledon. White House Aide Morgan Mason (son of Actor James Mason) used to be executive director of Illingworth, Morris, and when Friend Nancy Reagan wanted some new suiting for her husband, Mason hustled over some swatches from which the glen plaid was chosen.

The bolt of cloth was sent along to Beverly Hills Tailor Frank Mariani, who makes all of Reagan’s suits. He went to work with the quiet confidence that comes from knowing his customer’s taste: two-button coat, medium-width lapels, pleated trousers and six buttons on the fly. For $1,200 the suit was a beauty, and Mariani suspected back then that it might be destined for fame. “The President likes his clothes,” explains Mariani. “He builds a fondness for them.”

Emperors and their clothes remain an important area of presidential lore that has only been skimpily researched. It was a given back in Dwight Eisenhower’s time that when the President was spied coming down the corridor in the morning in a brown suit, he was in a bad mood. Aide Tom Stephens flashed the word all through the White House to beware. GQ’s Harber insists that Kennedy’s fondness for a two-button coat began a trend that drove three-button models out of the market. Kennedy also put the last nail in the coffin of the men’s hat industry. He was proud of his bushy hair and refused to wear a hat, despite the pleadings of the industry. Gerald Ford’s too-short striped pants wore for a Tokyo reception obliterated the news of the trade talks.

If world leaders were dazzled by Reagan’s blue-and-gray plaid, wait until they see the one he has stashed away in his closet. It has the identical cut and pattern, only in brown. White House strategists believe the President should spring it on Leonid Brezhnev in the fall, provided the Soviet leader has recovered his health.

Maybe recent U.S. Presidents have felt stylistically constrained by their position as a world leader. Maybe they have wanted to avoid stirring up any sartorial controversy. But consider that other world dignitaries, like Prince Charles and Nicolas Sarkozy, manage to also be leaders in style.

The situation in the White House has devolved even further with the current President. President Obama created a minor stir during the first week of his Presidency when he was photographed in the Oval Office without a suit jacket. It has been reported that business casual is now the norm on the weekends in the White House. At least President Bush, who was certainly no style icon, required some formality of dress.

American presidents exercise incredible influence worldwide. I wish Mr. Obama and our future U.S. Presidents would take the opportunity to stand as example for the t-shirt and flip-flop wearing masses. Maybe they could help reverse this trend of sartorial laziness, this attitude of idleness that infects the work ethic of the American populace.