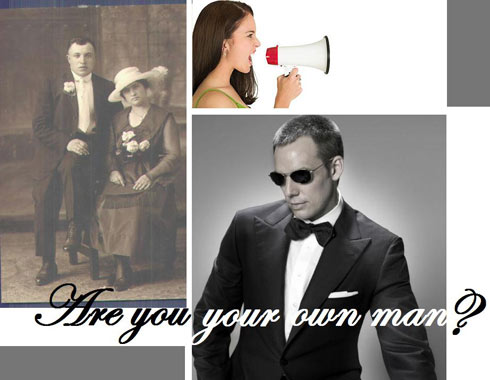 I know of many men who turn to close female friends for ‘feminine’ advice. The words of comfort they seek are not, they would have me believe, available in the company of men. With the women they trust they exhibit fear, irrational thought and insecurity – all attributes they are eager to conceal from their closest chums. The other thing they are apt to ask their good-natured girls is how the dickens they should wear their cloth. “Women know about that sort of thing” they utter meekly, as if knowing how to dress properly were some black art, beyond the ken and understanding of man.
The devil is, women are generally better at choosing clothing for their plodding and uninterested male partners; they drag them around shops like toddlers, their faces dark in gloom. They are valiant, determined and, in comparison to their infantile husbands or boyfriends, radiant with unmerited optimism.

However, I have seen as many sat far from the changing rooms, drearily dressed and ill-disguising signs of ennui dismissing the cavalier choices of their other halves with but a yawn and a flick of the hand. One particular man happened to look very elegant in a pair of white trousers and as I was awarding him my silent approval, his wife, who was sitting punching keys on her phone gave one look and a slight ‘Nah’ sound escaped her lips. The result? Such was the power of even the briefest disapproval that I watched the man in question approach the till without the magnificent trousers that had fit him so well.

Were a man to hold such power over the wardrobe of his woman? I think not. Unless she happened to be wedded to a gentleman of great fashionable repute, a woman might seek some sort of approval or input, but she has generally more idea about what she wants and how she appears; to receive a blunt ‘Nah’ would be irksome but she is unlikely to waver from her charted course.

Men are very much under the sway of women in modern fashion. Men are very likely to copy the easy-going style of a Hollywood heart-throb not because they respect the clean lines, simple colours and elegant tailoring but because their wife does; and he is very likely to take a risk, with something unconventional (or uncomfortably conventional) if he is assured of close, and possibly distant, female approval.

I once asked a young lady how she would like the man of her dreams to dress. And, although she was very particular about his attire, it was not exactly what I would consider to be the careful calculations of crisp elegance; “…erm, nothing too smart; can’t stand that, just a short sleeved shirt…and definitely some surf shorts to show his legs and then…some trainers. And I like it when men wear leather jewellery.”
After obtaining these details, I asked her how important it was that a man configures to this specification. She replied that although it wasn’t everything and that she could live with ‘differences’, she wouldn’t be able to resist changing the man she loved into the figment of her imagination.

My study in this area is light and is generally based on some extraordinarily un-English eavesdropping and exchange of anecdote; I have never been susceptible to the machinations of a woman who disapproved of my wardrobe. There have been times when doubts have been allowed to prosper in my mind, where I have been ‘under the spell’ as it were, but I believe I have possessed the required guts, balls and barbed words to dismiss the howling harpy hyenas from my mind. The lesson through which I achieved this independence was the lesson which many are disinclined to endure; the prospect of shopping alone.

Wilde considered that “A man who allows himself to be convinced by an argument is a thoroughly unreasonable person.” Although it would be unwise and wasteful to ignore the valid caution of a loved companion, one who surely has one’s best interests at heart, Wilde’s words do touch on that ironic theme of his; ‘know thyself.’ Many men might be happy that their women paint their fantasy or fiction through their choice of clothes, or, more cynically, that they choose men’s clothing that looks sufficiently plain next to their laboured magnificence. I would trust many of my acquaintance, women and men, for their opinions but I would very rarely allow anyone to change who I am; who I know myself to be.