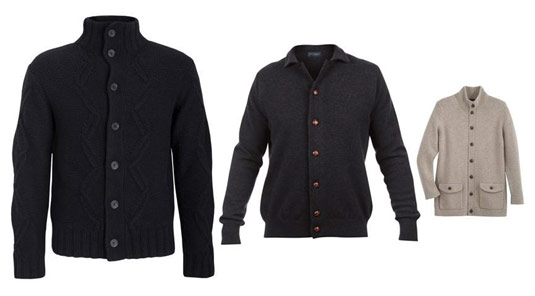 I am a weak willed individual.

Having preached the virtue of lists and belt tightening in the January period, last week I went out and purchased something which was neither cheap nor on the list.

The garment in question that caught my sartorial magpie’s eye was a heavy, thick knitted wool Cardigan Jacket by UK label Jaeger.

I suspect if you’re considering thick knits or a jacket substitute you’re most likely thinking Shawl Collar Cardigan, as popularised by the king of cool Mr Steve McQueen. But there is something to be said for this less popular choice.

At the risk of stating the obvious, the main difference between the classic Shawl Collar and Jacket Cardigan is the use of a buttoning funnel or standing collar – although there are variations around, as in this John Smedley version. Cardigan Jackets are also usually cut a little longer with the hem resting on or below the seat – but again variations abound.

While I like the idea of a classic Shawl Collar Cardigan possessing something more akin to a family-pack than a six-pack, they tend to make me look a little paunchy. For boxy or bigger guys I’d strongly recommend the Cardigan Jacket. Buttons from the very top of the funnel collar to the hem allow you more room for manoeuvre with your buttoning options. For example, buttoning only the two middle buttons provides a long slim V from the collar to the midriff, and a second V from the midriff to the hem (very similar to a suit jacket) which taken in the round is far more natural  and more slimming than that afforded by the Shawl Collar.

But my choice was based on a little more than mere disguise alone; for as versatile as the Shawl Collar Cardigan is, the Jacket Cardigan is surely more so. The ability to close the front of the garment to a variety of heights positively invites you to play with such things as ties, scarves and cravats -a subject touched on recently. And of course buttoned up completely is another look in itself, clean and uncluttered. While you can of course layer a Shawl Collar Cardigan I’ve always thought the straight up and down lines of the Jacket Cardigan much easier to play with and less contrived in appearance; whether that means layering a waistcoat underneath the Cardigan or Mac or coat over the top.