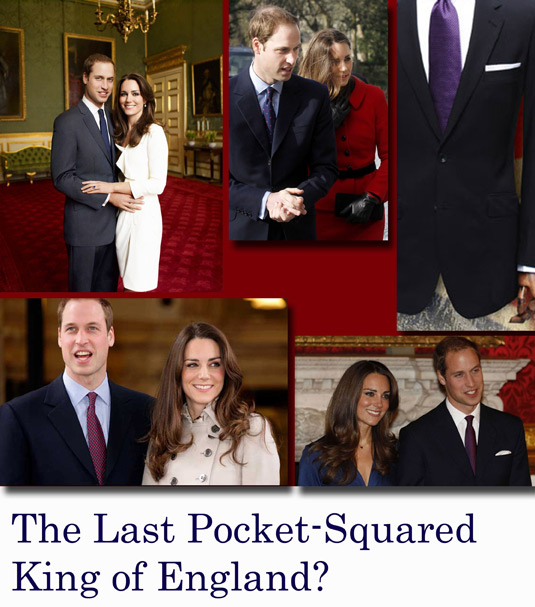 The unfortunate treatment of the upcoming Royal wedding has not been dissimilar to the modern treatment of the festival of Christmas; a glut of early enthusiasm, premature irritation due to over-exposure and a likely feeling of exhaustion when the important moment arrives. The Royal couple have not even begun their individual journeys to the church and yet the ‘congregation at large’ – the television-watching masses – are bored by the very mention of what is now euphemistically termed ‘Friday’s big event.’  Starved of significant street-party royal nuptials for years, we have gorged before the feast and are paying the price.

Instead of providing more meaningless predictions about wedding flowers, the colour of bridesmaid dresses, gold-braided Gieves & Hawkes epaulettes or gifts from the Sultan of Brunei, I think it is a perfect opportunity to discuss the sartorial future of the person who is responsible for creating the hullabaloo; the man upon whom all eyes will be fixed for, make no mistake, though his bride-to-be is an alluring figure, she has been living in borrowed limelight. Had his father not been such an admired figure in dandyland and beyond, invoking deserved praise for his excellent and extraordinarily well-preserved wardrobe, it would be unlikely that Prince William would merit examination. However, he is the son of a man consistently rated as one of the world’s best dressed and as the future king, his personal presentation is of great interest, particularly to his sartorially-inclined countrymen.

There is no doubt that, for a period, Charles attempted to exert his own style influence on his two sons – dressing them in double-breasted suits, sending them to Turnbull & Asser, extolling the virtues of a tiny tie-knot – but there was always something rather uncomfortable in Prince William’s face when he dressed in his father’s image. His suits looked like a uniform; Charles wears them as a second skin. Though he possesses his mother’s coyness of look, he has never lacked confidence when out in public but early years of dressing the part, when he was probably dying to be dressed like the average teenager, were awkward and forced. With his maternal reassurances gone, it was left to his father to mould him. Now that he has a woman of his own, a renewed confidence has appeared in his public presentation – and a new style, too.

Gone are the Charlie touches of extreme cutaway collars, tiny knots, formal-dress tie pins, patterned pocket squares and, crucially, double-breasted suits. Whereas his father dresses with the hang-it-all swagger of a prince from another age, William is quietly self-conscious; the only sign of his using a pocket square has been on formal occasions. He wears sober navy two and three-button suits, wears predominantly white shirts and rarely wears anything other than a plain coloured tie. In fact, his attire is closer to that of our elected politicians, with their identikit approach to suiting, than that of his father or his other nattily attired relatives.

Many will suggest that his youth is the reason for his comparative sartorial blandness and that, in time, the genes that he has evidently inherited from his father will show in his approach to dress, but some suggest that William is being groomed by the Queen for the greatest responsibility of all, due to her rumoured impatience and frustration with his father’s generation and their careless and selfish treatment of royal privilege. Perhaps this public-friendly approach has been carefully orchestrated, much as it is in the ‘Westminster village’ and The White House, to project the prince as less of a loftily-living constitutional Beau Brummell and more of a people’s man. Have we already seen the last pocket-squared King of England?