The Old Favourite: The Blue Blazer

“New York, New York – so good they named it twice” goes the popular saying, (with a doff or two to Mr Gerard Kenny). And so true: New York really is a fabulous city; the vibrant energy, fizz and cornucopia of ingredients, coupled with the cluster of soaring towers on Manhattan island, has always made me think of the Big Apple as the ‘cocktail town’; the Chrysler, Empire State and the MetLife tower like vast stems of some gargantuan martini glasses; the gigantic olives resting beyond the clouds in titanic vessels the size of a football stadium. And all the ingredients, the people that make up this fascinating city, scurrying to and fro at the base; to the Rainbow Room for a Gibson or the 21 Club for a Scotch and soda. Or perhaps, something warming and pleasant – like a Blue Blazer. 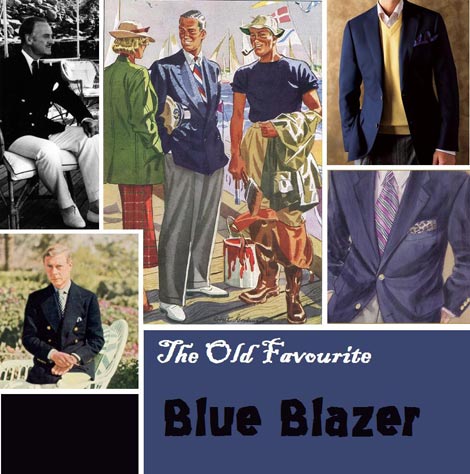 For the Blue Blazer, a mixture of bourbon, boiling water, sugar and lemon was designed to have such an effect; it is a drink for a poor gent, afflicted by a nasty cold. A friend, expert in cocktail mixology, informs me that the Blue Blazer is also useful the ‘morning after the night before’; “It’s no cure, but it makes you feel a darn sight better.” Something to turn to when things look rough, to lean on and even depend on, this verging-on-medicinal cocktail is not the only ‘blue blazer’ to offer such comfort. For the classic blue blazer, whether brass or horn buttoned, single or double-breasted is a versatile, comfortable and reliable friend. And like all friendships, the longer it continues, the deeper the bond. I am yet to find such a sartorial soulmate, but I do know others who wear ancient blazers with an unconscious pride; the fabulous thing about the blue blazer is that as it ages, it improves. It wears the spilled drinks, the backslaps, the hugs and rain-drenched embraces; it wears the music of a thousand bars, the sunshine of Sicily and the cold of Colorado. No laundry in London can remove these. Pale with the wear of years, shabby with the touch of a lover’s hand it nevertheless shines magnificently; a smart replacement seems somehow sterile.

Indeed, the sparkling new blazer – although a sight for sore eyes – seems rather sophomoric in comparison. Although, admittedly every blazer’s journey must start somewhere; buying others ‘blazer stories’ in vintage strikes me as rather lazy and dishonest. Niven liked to wear his blazer with odd, double-pleated turned-up trousers; Elkann wears a hand-me-down (acceptable ‘borrowing’ – it belonged to his grandfather) double-breasted, open with a Byronic shirt and skinny denim. Come spring flowers or snowfall, the wonderful charms of blue (the favourite of Beau Brummell), manage to keep ensembles resting happily between casual and formal. And the blazer itself, embodying all that is elegant and tasteful in the modern suit, marries well with almost any colour and style one may throw together.

It is said that one’s true friends are simply never unfashionable. The blazer of blue, with its sporting past, preppy connotations, and dignified aura is not the stiff, charmless cad some would imagine. Rather, it is genteel and well-serving; a warm and dear friend to all who wear it.