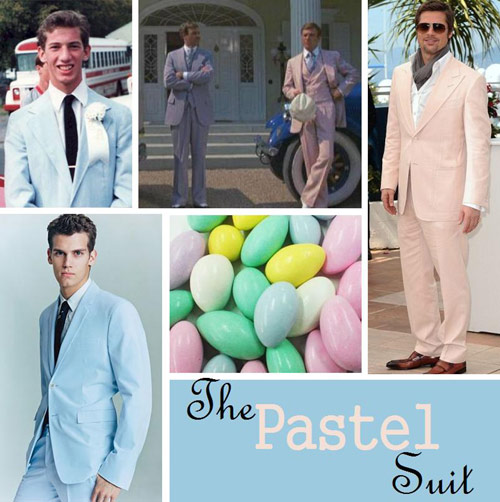 There can be no more daunting a prospect to a gentleman of traditional sensibility than that of wearing a pastel suit. It offends his sense of indifferent sartorial safety and seriously challenges his self-belief. Therefore, he steers clear.

However, though he believes no one could wear one well – not even a gleaming Leonardo DiCaprio as Jay Gatsby – it is possible to conquer the pastel suit without looking like a part-time barbershop singer or an overdressed ice cream salesman.

For a start, get the season right. In fact, make that the month. No one should wear these outside of June, July or August – unless you happen to live in the tropics.

Secondly, the occasion has to be suitable. There is no boardroom on earth – even one in Hawaii – that would welcome a pastel suit. The occasion must be something focused on leisure or casual and social enjoyment: a day at the horse races, or a cocktail party on a Miami terrace – even a hot summer barbecue in the countryside.

The most daunting thing is knowing which pastel tone to go for. I would strongly advise all except the darkest/handsomest to keep away from yellow pastel. Not only does it wash out the wearer, it also requires an especial air of savage cool which most men do not possess.

Instead go first for pastel blue or pastel pink. You might think the latter would be a risky choice but washed-out rose-tinted tones are relatively flattering and work well with many hair colours and skin tones.

Arm yourself with courage

Men no longer possess the confidence to wear the pastel suit. Even in this post-metrosexual era of peacock tolerance, strutting up to a summer party in a pale blue, yellow or pink suit takes more than ballsy bravado. Wear a candy pink pocket square and those walking past you might notice and turn their head briefly; wear a full suit of that colour and the crowds will part like the Red Sea as you stride through, blushing to match your attire. You will be marked out by many, a little harshly, as a mere attention seeker; a whore for a staring pair of eyes. There will be laughter, which will echo torturously through your sweaty nightmares; you will look at the dark suited crowd and envy their invisibility, their anonymity. You will catch a reflection and rue your moment of inspiration.

The fear of ridicule is too great for most men to attempt such a feat of daring. And yet, what of fear? Fear is simply a gaoler who jangles the keys, tauntingly, between the bars. Don’t sit in the dingy corner and block out the monotonous, bell-like sound; seize the opportunity and break out into the sunshine! Know that men wiser and greater than you have succumbed to temptation and resisting temptation on fear of ridicule is a childish notion. The world belongs to the brave; the meek shall not inherit the earth.

Pastel colours are a peculiar problem for menfolk. Perhaps it is the connection with maternity? Or with the feminine environment of the Martha Stewart cupcake-makers’ kitchen – pastel melamine bowls scattered amongst the pastel icing squares? Whatever it is, conventional gentlemen seem unwilling to adopt such an expanse of watered down colours. A friend of mine believes that only dark blue, grey and black suits are acceptable; in all other colours he states that you “look like something worth ridiculing.” Another friend says that the pastel suit lacks seriousness; “It’s a bit jokey isn’t it. Clownish.” Could I ever convince them otherwise? “Never. Whenever I see one I just think: Quentin Crisp. It literally has no masculinity.”

I differ in opinion to my friends. I will admit the pastel suit is often worn unconvincingly but I see so many opportunities for its deployment in the summer months; times at which a dark blue suit, no matter how well accessorised or paired, would be so dull and predictable.

A pastel blue suit on the other hand, simply accessorised, simply sings of summer; of the cool waters on the shore and the brilliant sky. Teamed with some creamy white Oxford shoes, white shirt, a simple navy polka dot tie and a white linen square it will be the very vision of the season.

Pink, yellow and green are riskier choices, and slightly less masculine; an experienced hand is required. Importantly, all pastels must be comparatively pale – three parts water to one part colour. Robert Redford’s famous rose-coloured suit in The Great Gatsby is about as pink as it should get. Heavily saturated pastels are the domain of zoot suited cartoon villains.