“A prudent man should always follow in the footsteps of great men and imitate those who have been outstanding. If his own prowess fails to compare with theirs, at least it has an air of greatness about it”. (Niccolo Machiavelli) 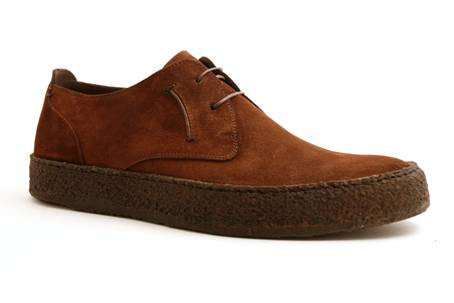 I spotted the above shoe at a recent press day for prestige British brands, hosted by London store Liberty. Going by the name ‘Pawson’, with full leather lining, real crepe sole, and available in brown and grey suede, it is the latest offering from British designer footwear brand Oliver Sweeney. A company known for its ‘Anatomical Last’ and the innovative updating of classic designs, you may know this shoe by its more popular name, the Playboy chukka.

I’ve always thought that if Cary Grant epitomises suited elegance then Steve McQueen was the gold standard for casual cool. By his example I’ve been led to such items as the ‘Harrington’ or Baracuta G9, shawl collar cardigans and the Barbour International.  So it was perhaps only a matter of time before I came to understand the aesthetic of that other great McQueen-ism the Playboy Chukka and low-cut.

Despite several companies producing variations of the boot –and claiming credit for its creation- the ‘Original Play-Boy’ was created in the 1930’s by a UK company called Hutton’s. Having gone bankrupt in the 70’s, first a Swedish and then Danish company bought the licence having them made to the original spec in England by White & Co of Earls Barton (sadly no longer in business). You would think after all that the Playboy brand would have perished, but in spite of changing hands and nationality, the originals are still available, of welted construction, this time manufactured in Spain. Unfortunately, owing to licensing restrictions on the Playboy name they’re only available in Scandinavia (thanks Heff).

Finding popularity amongst Modish and Ivy League elements alike through the 50s, 60s, and 70s, the shoe will forever be most associated with McQueen, who sported them both on and off screen; typically worn with light trousers to allow focus onto the shoes.

Never easy to obtain in the UK, providing you with a bit of back story to this classic proved almost as elusive, with no small thanks due to ‘Weejun’ of forum Filmnoirbuff and the creative team of Oliver Sweeney for filling in the blanks.