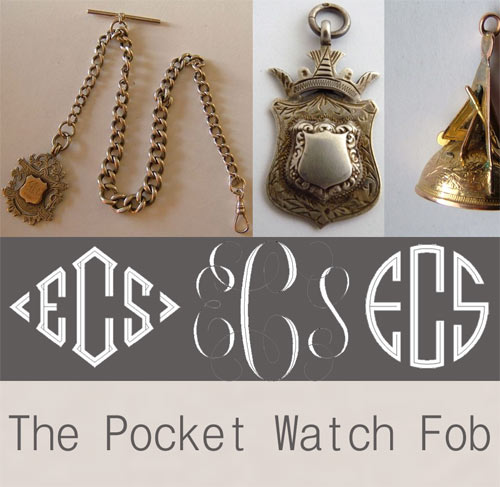 On the 1st February this year, I wrote on the subject of pocket watch chains and concluded;

Guess what? I went looking for a fob.

I think I have developed the Victorian disease for maximalism; for accessorising accessories. After I had purchased an appealing antique chain, attached it to my pocket watch and admired it in the mirror, it struck me that although the chain hanging down from the waistcoat’s mid-buttonhole had a tidy T-bar, common on Albert chains, there was a little tributary hanging down that lacked a conclusion; and so, the search began for a fob.

The first thing I discovered on my search for a suitable antique fob is the variety available. Gold, silver, brass; jewelled, plain, engraved; seals, shields, medals. Fob seals, often in gold and silver – denoting merchant or family crests – enjoyed a wide appeal as a fashion accessory from the 17th century until the 1830’s, their height of popularity being in the Georgian period.

Medals and shields were small badges of status, allegiance or achievement – sometimes only recognisable to others of a group; Freemasons often wore symbolic medals on their watch chains. After deliberating over budget and style, I settled on a non-precious metal shield design for two reasons; firstly, the best precious-metal designs are rather expensive and often ‘jewelled’ and secondly, shield designs often allow for personalisation.

“Personalisation?” you say, inquisitively. Yes, personalisation. There are a great number of shield fobs – with space for engraving – that are simply calling out to be personalised. A naked shield fob looks unquestionably strange and somewhat unfulfilled. A monogram or a family crest adds personality and character. The question is; what sort of monogram engraving?

It entirely depends on the design and shape of shield. An elaborate, Victorian fob looks best with a classic interlocking script; block characters look out of place in intricate frames. This style is, however, considered somewhat feminine. An Art Deco fob requires something like the diamond 3-line or circle monogram; the former was used as the monogram style of Jay Gatsby in the 1974 film with the initials ‘JG’, however, it is most often used for one or three initials.

All styles of three-initial monogram tend to enlarge the center initial – which represents the person’s last name. The alternative to this is interlocking script of two or four initials; however, there is something symmetrically sensible about increasing the importance of the family name in a monogram, and the three initial monogram achieves this.