The Power Of Three 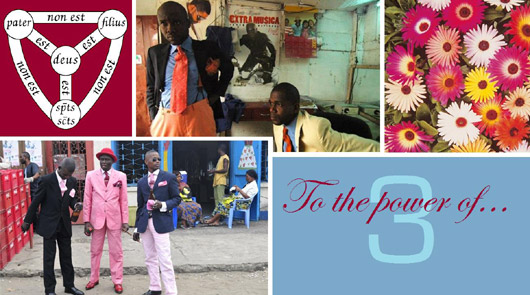 I was recently asked by an inquisitive young man whether I followed the three colour rule. Remembering vaguely an argument I had pursued some time ago with an acquaintance about a similar issue, I calmly asked what three colour rule he was referring to. Surprised at my apparent lack of knowledge he chivvied me on; “You know, that you shouldn’t wear more than three colours at any one time. No?” I nodded and changed the subject. I did so because I do not care to talk about ‘rules’ of clothing for any length of time. The red mist can so easily descend as I rage about restrictions on creativity, the shortness of life and the inanity of sartorial red tape. On this particular issue however, I was intrigued.

Three is a peculiarly bewitching number in our culture and the concept of trinity is one which pervades religion and myth. The second-hand wisdom from the young man gave me pause however as his words were not an encouragement to embrace three colours but merely never to exceed that number. By this logic, two colours and even one single colour are as acceptable as three. The trinity holds no special significance by this standard. However, there are a number of examples of similar rules which exist in certain cultures. The Congolese Sapeurs

seem more intent on combining three colours than shying away from exceeding three, although some suggest that many of them combine as little as one or two distinct colours; dark pink shoes with a light pink suit and a dark pink tie suggest one colour palette, not two.

It is by this logic that the young man might have been deceived into believing I was a subscriber as I was wearing a dark green tie, light green and grey striped shirt and light green and white striped pocket square with a blue jacket and white trousers. To his eyes, I was only wearing green, blue and white (although I was also wearing chestnut coloured shoes, do these not count?) I probably conform to this ‘rule’ more than I know. It is far from intentional as I am not a sartorial bible-basher or self-flagellator; the rule of three makes aesthetic sense in many circumstances but to follow it entirely for the sake that it is a ‘rule’ is to strait-jacket oneself.

It is simply too arbitrary; outfits with four or five different colours can be as elegant, sometimes more so, than outfits which never break beyond three. And to consider that the rule, in the modern lexicon, has veered from the power of trinity to a rather timid “Ok, so no more than three, probably best with two” tremble means that the future, by the strength of what this young man was suggesting, is not bright but instead, quite literally, rather dull. Go forth and colour your world.