The Profundity Of Style 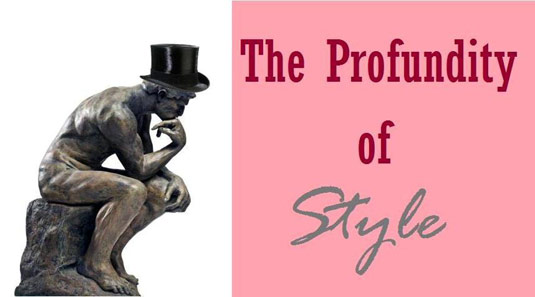 One of the greatest catalysts for the progression of personal style is a growing taste for Art. I find it impossible to isolate my taste in clothing from my taste in almost anything else, a fact which others might find depressing but which I find reassuring; the way I perceive things are, in my opinion, unavoidably interconnected. I remember reading a passage on The Sartorialist advancing eclecticism and denouncing lifestyle escapism – the act of retreating into a favoured past decade.

The picture in question was a gentleman on a vintage bicycle wearing plus-fours, a flat cap, a bow tie and iPod earphones. The Sart’s hope was that Eminem was the gentleman’s musical artist of choice and not something of the epoch he was aping in dress and transportation, the argument being that ‘some people go too far’ in their unilateral attempts to revive bygone eras.

While eclecticism has its merits and attractions, it is fair to consider that such aesthetes are very often entirely taken by almost every artistic aspect of an age. For example, Victorian style dandies often collect Victoriana and frequent places and events that would provide the best possible setting for their elegant period clothing. The sensibilities of style are often so entwined in a lifestyle choice that it is easy to forget how profound and personal such choices are when measured by the superficialities of dress. Style is infectious and one of the most quietly powerful facets of living, capable of altering one’s perspective on the world and adjusting not only clothing and living spaces but literature choice, hobbies and even political opinions.

While such an assertion may not stir surprise in the reader, it is a rarely acknowledged fact that an appreciation of clothing stems from a greater and deeper wonder of Art, which, along with the sophistication of our communication is what anthropologists believe separates us from the other creatures that roam this earth.

I find that it is rare for a man’s sartorial taste to be utterly emancipated from his wider aesthetic taste which some find predictable and rather prosaic but which I happen to think is a mark of identification and profundity. A man’s experiences, his personality and his history not only affect such choices but are also developed by them. Although links between literature choice, clothing and interior decoration taste are justly assumed to be more prevalent in aesthetes, it is an interesting activity to assemble the accoutrements of one’s life and watch as the threads between them entwine and form the spectre of a chosen aesthetic.