Monogramming Your Clothing: The Question of Personalisation 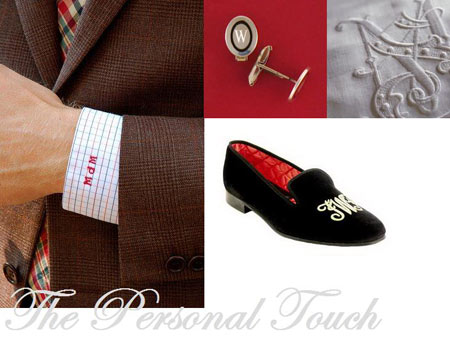 “Is something the matter Jeeves?” asked Bertie, quizzically. Jeeves turns around slowly and informs his young master that there appear to be some ‘curious objects’ in his wardrobe. “Curious objects?” parrots Wooster, pacing over to the wardrobe with furrowed brow. Upon seeing the items in question, Bertie looks at Jeeves innocently and proclaims; “They’re handkerchiefs Jeeves, handkerchiefs” to which the great valet frowns and smiles, knowingly; “I think not sir, they appear to have writing on them.”

This superb scene from the Granada production of Jeeves & Wooster, based on the fabulous Jeeves books by PG Wodehouse, aside from being one of my favourites, introduces rather nicely a topic which I feel needs addressing; the question of personalisation. The only thing I have personalised is a pair of black velvet Albert slippers.

It has never really occurred to me to personalise shirts, handkerchiefs or other accessories. I can see the appeal; adding your entwined initials or even a family crest to small items can add personal value to the item in question. Your stamp is there to see, the item is uniquely yours. As Bertie quite rightly ripostes to Jeeves critique; “I think they look dashed smart!”

However, Jeeves’ equally powerful response to Bertie’s suggestion that “everyone gets things initialled these days”, that he thought the practice was “…reserved for those who were in danger of forgetting their name” is also a consideration.

Does the man of style really need to add his monogram to his carefully chosen threads? Is it a requirement that he see his family letters, no matter how smartly arranged, on clothes and accessories? I, being one who has arranged letters in what is perhaps seen by some as a vulgar manner on a pair of honest slippers, cannot possibly pass judgment on the practice per se; decrying the use of personalisation would reek of hypocrisy.

I still consider my slippers smart, but I have grown into the idea that they are a one off – I make no plans to initial cuffs or linen handkerchiefs. In one way, initialling cuffs to me looks untidy, no matter what the font; it draws the eyes of others because it looks unusual and a little out of place. In comparison, considering the Albert slipper, it always looks conspicuously plain without adornment. Thus, a monogram or a crest actually balances the slipper correctly, just as a bow or a buckle would.

Speaking to a rather opinionated chum of mine, who is of the opinion that initialling clothing is the sartorial equivalent of needing a personalised number plate, it seems that critics of the practice mock the insecurity of a chap who needs people to see his name stitched into his cotton and linen.

While I can understand this viewpoint, I think it needs to be remembered that personalisation is precisely that – personal. Although there will be the armchair aesthetes who’d argue that real individualism requires no signature, many people of considerable style feel moved to identify some, or even all items of their wardrobe.

After my meandering thoughts, which had turned and retreated as many times as an Italic monogram, I concluded that personalisation is only universally tasteful when it requires a searching eye to identify it. I have seen gentlemen with initialled shirt collars, suit lapels and even shoes.

Numbers sometimes accompany the letters, perhaps an ostentatious reference to the birthday of the wearer, or worse, even the number of shirts, suits or shoes he might possess. Such vulgarity is rare, but it is seen. When certain people reach the apogee of financial and social achievement, they feel confident and determined that the world know exactly who they are. They pay for the dubious privilege of having the world see their identity before they’ve opened their mouths, offered an ungloved hand or slipped them a card.

Then there are the chaps that don’t feel comfortable walking around in clothing that, if it was mislaid, might as well belong to somebody else. Since they carefully selected their Sea Island shirts then they are inclined to brand them accordingly. This I can certainly appreciate, especially when handing over significant sums for the item in the first place.

The point is to brand stylishly and with subtlety; the choice of font is a top consideration, as is the colour – a contrast might be considered too outré whereas a tone-on-tone is much more subtle and requires more than one glance for identification, but the most important thing is where on the item in question you plan to personalise.

To personalise on the inside of a shirt or suit is indeed subtle, but it smacks of a schoolboy inclined to lose his uniform. I think the idea is to imagine yourself in the position of a great artist preparing to add his signature to the masterpiece; if one is looking long and hard enough, one will see it. For this reason I believe it is better to add a subtle signature in a darker or lighter tone of the item in question, as anything else can look like graffiti. This is so that, just like the signature of a fine artist, you might mistake it for being part of the design.