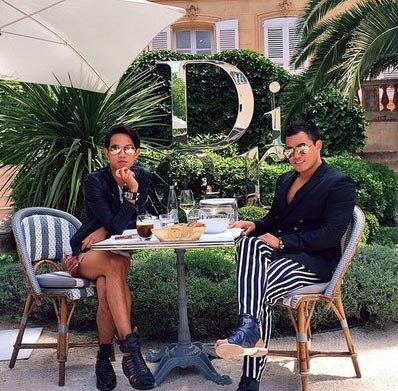 Scott Fitzgerald’s words are never out of date. And there is no better example of this than the notorious Rich Kids of Instagram.

The lives of the wealthy have always fascinated the commonfolk. The cult of celebrity, salacious gossip about tycoons’ scions and the exposure of alcoholic diaries of aristocratic lounge lizards are nothing new. ‘Celebutante’, ‘RKOI’ – they’re just new terms for an old phenomenon.

It used to be called ‘Society’ and it claimed a haughty superiority to everything and everyone else. It led with fashion (the mourning Queen Victoria sparked the Victorians long obsession with wearing black), was instructional on matters of form and conveyed a certain lifestyle that others looked up to and wished to emulate.

Society went to the races at Ascot – so went everyone else. Society ate at Oscar DelMonico’s – so tucked in all who could.

Now, ‘Society’ posts prettily filtered pictures of jets, yachts, Vuitton and AP watches all over a social network. Exposing their gilded, carefree lives to the world with glee and a giddy sense of entitlement, the RKOI are one of the most significant social sensations since the dawn of the internet.

Behaving much like Pinocchio’s chums on Pleasure Island, or the Buchanans in Gatsby they “smash things up and retreat into their vast carelessness” – so careless in fact, that they document their ‘exclusive’ lives for everyone to view online.

The idea behind many of the employed hashtags is inevitably envy.

#youcantsitwithus, #bornrich, #flyprivate – these are not the call signs of open inclusion or balanced upbringings.

The pictures themselves are also stunningly off-putting.

A well-fed late-teen lies in a bathtub half-naked holding a Methuselah of Cristal champagne, blowing his lips in mock-kiss, concealing his eyes from the flash with a pair of sunglasses that cost as much as a television.

Another shows a Bieber-esque twenty-something on his father’s helicopter carrying a Chanel backpack, swearing at the camera as a pretty brunette licks the side of his face.

Kids they are. But kids that could strike fear into the hearts of many a luxury brand.

One of the things I have always found fascinating is when brands ask to be brought ‘to life’ by their own customers.

Fashion design megalodons like Ralph Lauren don’t really do this, and have actually thrived better because of it. Bringing something ‘real’ to the table removes any sense of mystery and fairy tale. It makes it more commonplace, even accessible.

If you take Lauren’s perpetual Gatsby aesthetic for Purple Label, it works because it’s a fantasy and not a reality. I really wish there were young wealthy chaps with white wool suits and spectators dashing about a Hamptons estate in a white 1930s car – but there simply aren’t.

It’s the same effect with Vuitton’s (or practically any watchmaker’s) use of celebrities in their campaigns. Celebrities are so fascinating because they are partially hidden. It makes them more glamorous, which makes them more attractive – which, in turn, makes them want to hide more.

The key word ‘hide’ is lost on the RKOI. They flaunt and flaunt and flaunt. They wear everything and anything because there are no rules and no limits. Though brands have carefully built up balanced images to appeal to a broad cross section of people, their excessive and often tasteless display points more to the vulgarity of the brands than their quality or style.

This is the danger for any brand on the RKOI radar that embraces social media. Your brand, and to an extent your product, ceases to be in your control. They see it, they buy it, they flaunt it.

Free marketing? Be careful what you wish for.

The gluttonous piling of watches; the collages of Ferraris with firearms; the line of cocaine on a Tom Ford suit – these are the things of nightmare for any brand wishing to claim a sense of rarity, craftsmanship, elegance and social responsibility.

Worst of all, they are absolute kryptonite for a brand wishing to carefully maintain an image of style.

Perhaps when they wanted the brand to come to life, they should have read Mary Shelley first.