The Season Ahead – A Jean Jacket 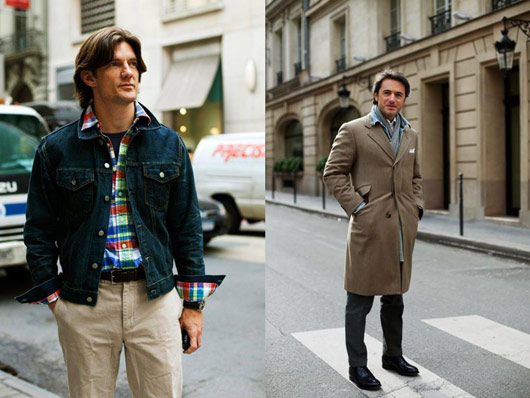 We’re half way through August and I’m already planning things in September and October. It’s safe to say summer is done; and so it’s natural that at the moment I’m looking to the season ahead and planning what items of clothing will be added to inventory.

There are two considerations in my own case. The first is that I spend less and less time in an office these days, and sadly as such a suit has become less and less a requirement. Almost as much of my time requires a more casual wardrobe, smart enough to be presentable when I turn up at a shop, tailors or the like, but nevertheless informal and comfortable for hiking around town. Indeed, in many cases a suit would give out entirely the wrong vibe.

The second consideration is simplicity. As I mentioned recently in my recent post on shirt and tie combinations, I’m attempting something which is long overdue; paring down my wardrobe to some key simple looks and core items.

The photos above, which come courtesy of The Sartorialist, are taken from an exhaustive archive of looks and kit I have captured online and filed for future use. The key element, and where my mind is circling, is the jean jacket.

To begin with I have a thing for short jacketing that cuts off at the hip/waist at the moment. My feeling is that while such jacketing looks good on the slim, it also helps those with a little heft around the middle. Longer garments in this latter case tend to accentuate the belly –in part by providing a sort of hooping effect- while the short jacket resting on the hip de-emphasises the torso and lengthens the leg, producing a seemingly taller slimmer silhouette.

The current trend for Trad/American work wear provides a useful frame work for dressing the jacket up and down –particularly so in the case of jean jackets. A suitable mix with crewneck T-shirts and neckerchief for the ultra low key, or soft collar shirt and knitted silk ties with squared ends resting at the waist for an edgy semi-formal approach.

Our friend in the picture on the right highlights added versatility by dressing the jacket with more formal trousers – in his case slim cut flannels – and the potential for layering. I’m not sure I’d layer it with a Covert Coat (although I have thought about it), but a raglan sleeve raincoat, straight cut and three quarter raincoat with a blue polka dot silk scarf and we’re in business.

The other virtue of the jean jacket is that it responds well to any colour of shirting and, as the chap on the left demonstrates, particularly well with chinos. This is the final element. While I’m not only pairing down my shirting choices I’m also considering abandoning jeans in favour of British Khaki chinos. But that’s another post…