The Story Of The City Tailor 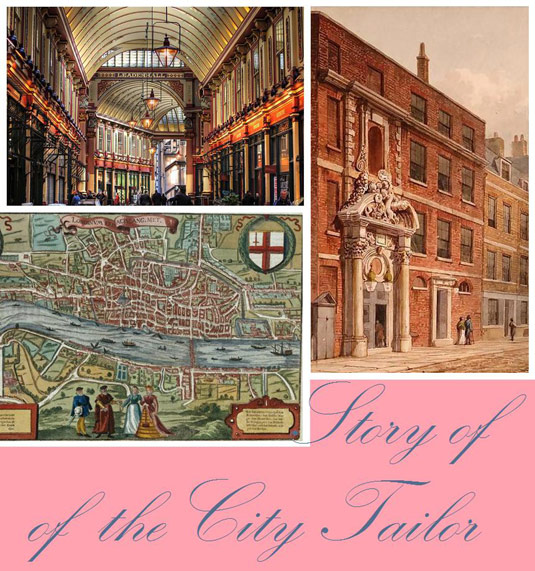 “We’re just a City tailor” are not words of explanation or excuse but admirable, although unnecessary, humility.  The craft of a good number of City tailors is good enough to rival that of a whole mass of world tailors – many of whom would never cede to such self-deprecation –  but the reality of the Square Mile Sinbads is that they live in the great shadow of a little Mayfair street known as Savile Row. I know several tailoring institutions in the City, none of which court a grandeur or acclaim beyond their status. Tucked away in little side streets, down dark alleys away from the sunlight, there is something delightfully Dickensian about these establishments. Unlike the Row, which you can stumble upon whilst drifting in from Regent or Bond Streets, you have to know where your City tailor is; they are not clustered together on some well-ordered boulevard.

The City of London is the London of the Middle Ages and the White Tower, the London of Dick Whittington and Shakespeare. When the City was burbling with trade in the shadows of great churches and when the Great Fire tore through its thatched roofs and wooden frames in 1666, Mayfair was but a field. It was in these old lanes that the first London tailors were established. And it was in the 14th century that the Worshipful Company of Merchant Taylors was incorporated under Royal Charter and the Merchant Taylor’s Hall constructed on a site near the aptly named Threadneedle Street. Until the 18th century expansion of London’s commercial boundaries, this was the beating heart of London tailoring; London’s original Savile Row.

There are sadly no survivors of the glory days. The destruction wrought by the Great Fire, the transfer of wealthy society away from the area to the leafy neighbourhoods of the West, as well as the gradual industrialisation and subsequent decline of the East End, all contributed to the decline of the City of London as the tailoring hub of London. New establishments begun elsewhere, particularly in the newly fashionable areas of St James’ and Mayfair, inevitably bagged the custom of the best patrons, most importantly that of the Royals; in such an era, wherever they led, others followed. The Worshipful Company of Merchant Taylors maintained itself as an association for London tailors until the end of the 17th century and exists now primarily as a philanthropic organisation.

The City, in its current guise of an international finance centre, is now a very natural location for tailors. There are very few areas of London with such a density of professionals in need of good suits. Savile Row, with its higher prices and West End location, is appropriately the choice for lunching board members, Mayfair based hedge-hogs and visiting sartorial pilgrims – but these are few and far between. Savile Row is largely an export these days. Though fewer commercial berths in the Square Mile are occupied by City tailors than ever before, there are still a considerable number of these gems located around the gleaming towers of financial institutions. It’s difficult to imagine, in such an area of glossy, 21st century pretension, that there was a time when those same streets were unpaved rivers of effluent, when St Paul’s had no dome and when little tailoring shops lined the tiny lanes around Cornhill, their proprietors standing in the doorway, eagerly awaiting their next customer.