The Style of Sherlock Holmes 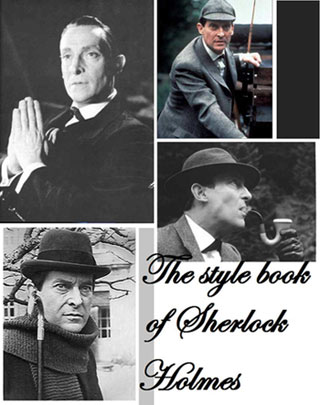 One of my favourite treats of entertainment is settling down, in great comfort, to watch a period detective mystery. My two favourites are undoubtedly Agatha Christie’s Poirot, as portrayed by David Suchet and Sherlock Holmes as portrayed by Jeremy Brett. I admire the detectives for their manner; their habits logically conform to their methods. They are introverted but fully capable of a civility that borders on seduction. They are powerful, mesmerising figures – glorious creatures of detective fiction that expose the weaknesses and strengths of humanity in one intoxicating character. In addition, the soundtracks are fabulous and grandiose; tender touches of romantic melodies that lift the heart and glorify the imagination.

My admiration for Brett’s Holmes is relatively recent – I had always been a Poirot man but I have enjoyed Holmes, altogether a different character, in many ways. I had always marvelled at the costumes of Poirot; particularly the elegant ensembles for Hercule himself. Wonderfully tailored items, exquisite crispness to the cloth and an enviable shine to the polished shoes. Poirot could also be quite decorative. Holmes by comparison is invariably clothed in gloomy black; a simple white shirt and that curious necktie that is mostly hidden under a turndown collar. In many shots, Holmes is attired as darkly as an undertaker; it is only that Brett’s Holmes possesses such outrageous wit and brilliance that we come to accept his Dracula-like dress as part of his wonderful character.

However, such simplicity is seductive. As costume, Holmes’ clothing is revolutionary and distinctly modern. He is also clean shaven and, rather famously, does not conform to the strict day and evening dress codes of Victorian England. The plainness of his attire is in a sense soothing as well as surprising; as his dignified appearance and perfect diction lend to an image in the imagination of a conformist. The reality is somewhat different. He has, of course, his own methods and his wardrobe perfectly illustrates this trait; a simple bow to decency and honour, that he should always be turned out exquisitely but simply. Following from that everything about his dress suggests a lofty contempt for the inadequacies of a fashion follower. A confident introvert, you have every sense that Brett’s Holmes is as concerned with evening dress as he is with the asinine mutterings of the bumbling Lestrade; whether this attention to detail is to accentuate his eccentricity I do not know, however if it were for the reasons I have advanced I would surmise that such an intent shows a greater understanding of subtlety. Brett’s portrayal is eccentric enough and to believe that the great detective dresses in a modern but very well-tailored manner because of his deep understanding of the ultimate unimportance of trend and at the same time, the mystical allure of a signature, is rather satisfying. While not flowery or effete, Brett’s portrayal of Holmes borders on a variety of cold dandyism; he has all the hallmarks of a superiority complex and the languid poses of a late Victorian lounge lizard. And yet, he is so much more. There is, I would wager, a varying amount of Brett’s Holmes in all of us.