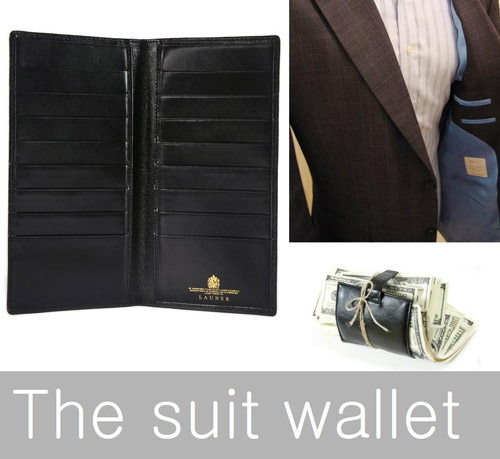 “Do you put that in your pocket?” the tailor said, handling my knobbly crocodile-skin folding wallet. He seemed surprised, and ever so slightly disappointed.

“No” I responded “I usually put my wallet inside my bag, or my back trouser pocket.” Shaking his head at my custom, he reached inside his own suit and slapped down his own wallet on the piles of swatches; “That’s what you want. Made for a suit, that.” I opened this rather slim, rather tall worn piece of leather and was indeed appreciative of its design that accommodated the same number of items in a small folding wallet with less of a resulting bulge.

Instead of credit cards, driving licences and store cards being packed on top of each other they are arranged so that ‘card layering’, that contributes so much bulk to the wallet, is reduced. Of course, this system means that the height of the wallet is increased to a conspicuous size; suit wallets are a great deal taller than the average wallet. The problem this creates is simple; where do you put the wretched thing when you’re not wearing a suit?

Ideally, a man should only use one wallet. In spite of the fact that on my daily jaunts, I use little more than one or two cards, I still feel it necessary to have a billfold; it just adds an element of security. To know that cash and plastic are all ‘locked up’ in one place. I once went around with a loose card and notes in my pockets and panicked at several points that I had misplaced one or the other.

Sadly, the one-wallet theory is not a happy one for the Monday to Friday suit man. A suit wallet is certainly better for his suit but switching to a suit wallet entirely would mean jumper and jean weekends would have to be altered to include, invariably, a blazer or odd jacket. And so the inconvenient truth is that he must be saddled with two wallets; the suit-friendly tall chap, which will not anger his tailor, and the convenient and back-pocket weekend billfold.

Fortunately, this apparent excessivism can be achieved at modest expense. Launer, the Queen’s handbag manufacturers, have been making fine calf leather wallets for donkeys years. A full size suit wallet is about the same price as a keyring at Louis Vuitton. Black is customary but dark brown and bridle tan are there for the taking.