The Way You Wear Your Hat: The Top Hat 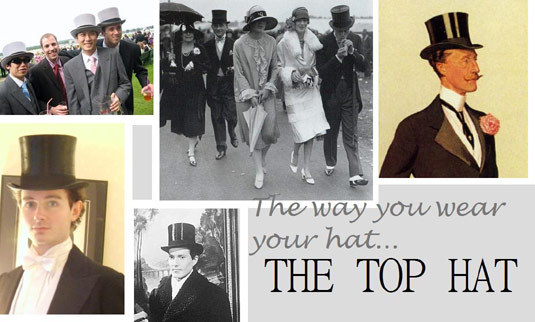 Ideally, all advice should be seasonal. The weather report is the perfect example of why words of wisdom have a time as well as a place; no one wants to know how sunny it’s going to be in June in the dark hours of December. I have always considered that the fashion world is in a constantly unreal and very disagreeable state; reviewing summer clothing in winter, writing about furs in the heat of June. Awful. Sartorial advice should preferably cling to the relevant issues of the season, otherwise like all unseasonal advice – like that of a mother warning against the fripperies of collegiate distractions at the beginning of summer instead of the first weeks of autumn – it gets ignored.

However, I have long considered that style is about more than clothes and I have been aching to write a new series not on clothing itself but the manner in which it is, and the manner in which it could be, worn. Once a gentleman has settled on a houndstooth jacket or a polka dot tie he has only completed half of the required steps towards presenting himself in the best possible way; to avoid dispensing opinion on the last few steps is to miss an opportunity. It would be a disservice; no one wants to have a wheel half-fitted.

For the series, I have humbly borrowed Ira Gershwin’s line from one of the more famous numbers from the Astaire feature Shall We Dance. Appropriately, but perhaps slightly out of season, we begin with a feature on hats, and not just any hat but the king of hats; the topper. Hopelessly out of fashion and consistently declining in use, the still-wonderful top hat is required wear at Royal Ascot in the warmer months and is also optional for morning dress at weddings. Aside from a tiny number of period-clothing devotee dandies, this is as much use as it gets this side of the pond; even the royals only wear it when they have to. I have no idea whether it is required in the United States, or even expected; so antiquated is it as an item of headgear I would not be surprised if the only top hats stateside are the ones spotlit in museums.

However, it is often a popular choice for fancy dress and indeed for fancy dressers. It has followers and collectors, like any iconic item of clothing, and however small the interested audience, the top hat is still known today; few people of any class are unfamiliar with the design. Perhaps due to its rarity, when the time comes for use, some are confused as to how it should fit and how it should be worn. Firstly, I would advise anyone interested in owning their own topper to get their hands on an antique silk version. The modern felt versions are not inexpensive and their simulation of silk, while not exactly dreadful, isn’t even close to the deep shine possible with the original.

At good milliners like Locks, antique silk top hats are prohibitively priced. The quality may be high but the cost is eye watering. The real bargains are to be found on eBay where a silk topper of reasonable quality may be purchased for less than £100 – relatively far less than a gentleman would have paid in 1890.

Once a good silk hat of the appropriate size has been secured, it will need consideration before use. Firstly, the top hat should sit snugly on a gentleman’s head; a loose top hat is a liability. One does not want to induce a headache but a little padding in the inside band may be required to achieve the correct fit. Secondly, this fit should achieve a placement on the top of a gentleman’s head – it should sit high and proud, not be allowed to sink to the top of his ears. From the image above, you can see that the gentlemen visitors to Ascot at top-left have allowed this to happen; their hats appear wide and ill-fitting, as they falls to their ears. The antiquated images of Ascot-goers and others display how different, and in my opinion more elegant, the hat looks when it sits on the top of the head, allowing clear space between the top of the ears and the bottom of the hat, as well as the subtle angle of wear. Always remember: the ‘top’ hat is for the ‘top’ of the head.