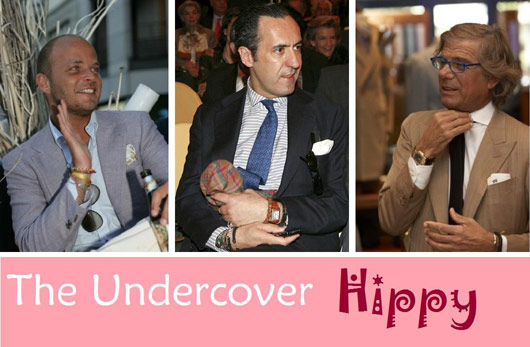 The Godfather of sprezzatura, some say, is the now legendary Gianni Agnelli, the whipped-cream-haired motor magnate who famously wore his watch over his shirt sleeve in order to be able to tell the time more easily. This foible, and other sartorial idiosyncrasies, earned him attention and plaudits as a man of rare pragmatism and relaxed elegance. His style, while never outrageous or controversial, displayed an awkwardly charming humanity which belied his status as one of the wealthiest and most powerful Italians in the world. While always smart, he was never stiff; instead of manufacturing a look which might have ‘worn’ him, he simply wore clothing and silently commanded it to do what he wanted it to.

This victory over costume aligns with the adage that a man should wear the clothes and not allow the clothes to wear him; all that a man is should not be disguised by his attire. This is perhaps because it is humanity, and symbols of humanity, which are the more attractive, the more appealing and that the concealment of such symbols renders a man robotic in appearance. In much the same way that it is the flaws we admire and miss the most in the ones we love, it is the revealing of the man beneath the suit which instigates interest and attraction.

The three men pictured above will be well known to trawlers of The Sartorialist. What I think is interesting is that in all three pictures, there is an absence of posing. All three are expressing emotions. There is no pouting, no “this is the best shot of me” jacket-and-tie-straightening; it’s all personality and, crucially, all rather personal. For while it is a certainty that all three are wearing fine tailored clothing, it is also clear that their consciousness of such tailoring does not extend to removing or covering items that many gentlemen consider to be anachronism to the finesse otherwise displayed. On their wrists you can see all sorts of souvenirish woven and beaded bracelets that one would imagine would generally appeal to a passing pack of language students.

Don Jaime de Marichalar (centre) wears a Jack Sparrow-esque collection of bangles and beads alongside a vintage wristwatch that may be Cartier or Jaeger LeCoultre in addition to a windowpane-check suit, horizontal stripe shirt and Hermes tie. Lino Ieluzzi (right), perhaps in discussion about tie knots or tight collars, wears a plain metal medicine bracelet alongside a woven leather bracelet, on his other wrist is a clashing gold bezel vintage wristwatch and he peers through blue acetate glasses. Luca Rubinacci (left), the most youthful of the trio, wears a mixture of beads and metal in a variety on colours on his right wrist.

There is no doubting that some readers will find this attention to detail, or lack of – whichever the case may be – unattractive and an unfortunate example of the modern man’s tendency to downgrade sartoria, but this sprezzatura actually succeeds in adding that vital element of humanity to the ensembles. It does not look manufactured either, as none of them are intentionally rolling up their sleeves to reveal what some might see as evidence of a midlife crisis. While sophisticatedly garbed, the bracelets convey a more pastoral image of the gentleman; as comfortable as he is in a double breasted jacket, you can see him at a barbecue holding a bottle of beer, chuckling at the songs being sung by the fire. He looks fun-loving, excitable and doesn’t hide himself behind his acquired taste in clothes; he is, quite simply, human.