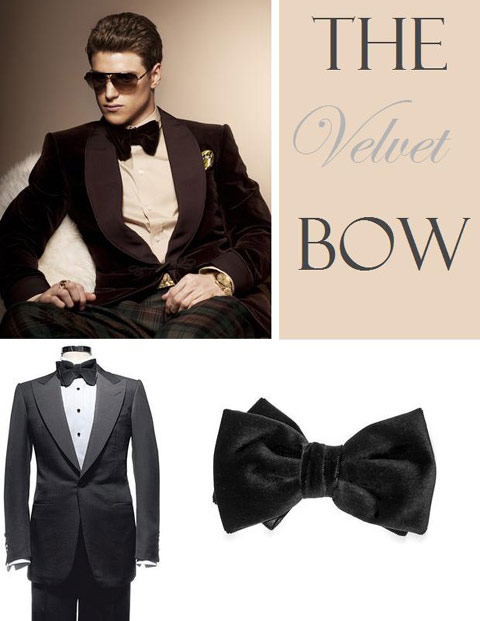 The duty of wearing black tie is avoiding individualism; refinement is permitted, adornment ill-advised. Most men are not interested in adornment, so the act of wearing what every other man is wearing is actually rather comforting to the majority. As fussy and funny as the ‘t-shirt and shorts’ man might think black tie, when he sees everyone else is so attired, he relaxes into the evening, safe in the knowledge that the oddity he frowned upon in the mirror is not alone.

Other men, the ones who relish black tie, often find it rather frustrating that they have such little room for experimentation. Custom warns against ‘peacocking’ and so they find themselves, however more elegantly cut, in the same attire as every other Tom, Dick and Harry; wool dinner suit, white cotton shirt, black silk bow. A rogue pocket square is a temptation, but so often regretted and though buttonholes are an addition frequently neglected by the majority, many well-dressed men are still reluctant to employ them. One friend ‘dissed’ my red carnation and informed me that a modern James Bond “would never wear a flower.”

The choices for subtle individuality are slim. A stiff shirt with a detachable stiff collar is certainly an option but it’s bothersome and takes practice and patience. A creamy white jacket isn’t as smart or as practical as black or midnight blue, and many consider it ‘out of context’ if deployed away from Glyndebourne or the Riviera. Waistcoats are useful, but a no-go in the warmer months and they are increasing in popularity, threatening their status as a choice for the ‘individualist.’ I think both patent Oxfords and pumps are wonderful; still surprisingly rare and very elegant. However, many graceful and frustrated gentleman already own a pair or two and are seeking something different, something more unusual which will mark them as a man of thought and subtlety.

Bring forth the velvet bow tie. Shocking? No. Brave? No. Unusual? Certainly; however ordinary the idea of a velvet bow tie seems, you would be hard pushed to find another at the same event. It has a mildly foppish quality, something between Austin Powers and David Niven, and it offers an alternative texture and structure to silk, contrasting perfectly with one’s lapels. It’s also ever so slightly naughty; the velvet bow tie man is certainly not a ‘stiff in a suit.’ There is a faint and attractive hint of scandal about him; he has seen things, done things – but of those things, no one dares speak. He might be tempted to pair his bow with a ‘waterfall’ pocket-square but this would hamper his underlying masculinity; a simple puff of creamy silk will suffice.

The hell of it is, the self-tie velvet bow, the answer to the ‘subtle individualist’s’ black tie prayers is, rather fittingly, a devil to find.