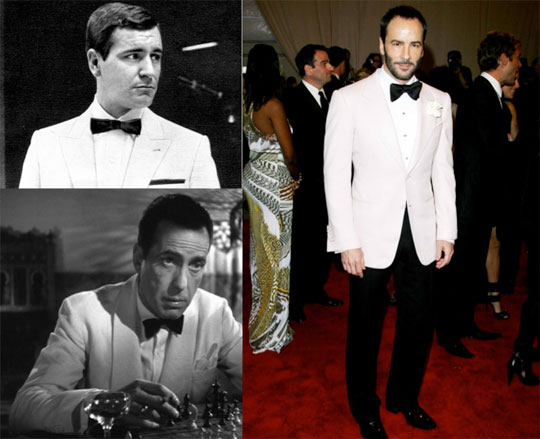 “The only person who looked good in a white dinner jacket was Humphrey Bogart in Casablanca. And that’s only because it was filmed in black and white.”

The above comment was made to me by an acquaintance when discussing a wedding I am due to attend later this year at a palm-treed, sandy-beach resort hotel in a particularly warm part of the world. The occasion, seemed to me, to suggest the use of the ‘white’ dinner jacket instead of black; the ‘summer’ or ‘tropical’ option. It won’t be oppressively warm, but the idea of wearing black barathea in such a place is unthinkable.

I say ‘white’ but the proper versions are actually cream or ivory and an entirely different tone to the white dress shirt underneath. There’s very little cause to use them in Blighty, unless Glyndebourne (or other summer events) happen to be particularly warm, and the practice of wearing formal dress in tropical heat has, understandably, declined. This has resulted in the white dinner jacket becoming a ‘non-essential’ component of the European gentleman’s wardrobe – unless you happen to be an intrepid cruiser.

If you Google ‘white dinner jacket’, or some variation thereof, you could be excused for thinking that fashion has abandoned this sartorial option. Most of the images are of chiselled catalogue models, looking into the distance, wearing weak wing collars, clip on satin bows and an off-white dinner jacket, by companies with names like Fullers Formal Wear, that looks several sizes too big; the sort of image that appears in the very back pages of a little-read weekend newspaper supplement, advertising half price formal rental.

Occasionally, there is an image of a dapper Tom Ford or Roger Moore wearing appealing versions, but these are rare oases in a desert of poor examples. It’s no wonder that men considering the white dinner jacket, already apprehensive, return to their trusty black or midnight blue vouching never to wear anything but.

Personally, I think this is a great shame. Firstly because there are too few options as it is for men to choose from for formal evenings. Secondly, because the white dinner jacket is an iconic garment that recalls an era when adjusting dress to climate and occasion was second nature to well-dressed gentlemen; a quality that is, unfortunately, on the wane. I believe it is possible to pull off the white dinner jacket effectively, it just requires consideration of these priorities:

This is the single most important element. It matters not how finely constructed your jacket is, if a white jacket looks too big – or indeed too small – it will appear so to a greater extent than your black or midnight blue jacket. This is simply because lighter colours reflect light. I would always err on the side of wearing a white jacket smaller (narrower shoulders and shorter) than a darker one for this very reason. If at all possible, get your jacket bespoke, MTM or at the very least get a RTW adjusted by a professional tailor. Take photographs from all angles; it is easier to drown in white than black.

There are two options for lapels: shawl and peak. Ignore the pictures of Roger Moore in a notch lapel cream jacket; this jacket is still formal and notches are not appropriate. Shawls are very smooth and the default for the white dinner jacket, but can look rather Rat-Pack-band-leader. My preference would be for peak lapels.

The jacket should never be truly ‘white’ but rather off-white. In my opinion, the more ‘off’ the better; there is a more satisfying contrast with the white shirt and it is subtler.