To Bristle with Pleasure 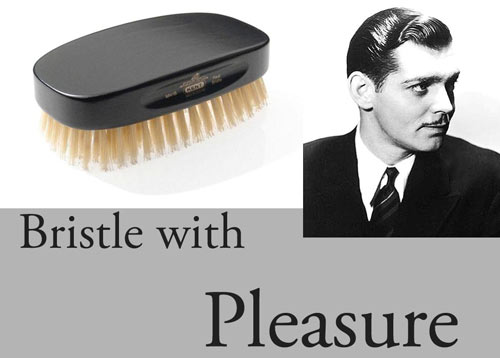 “Growing old offers as many pleasures as punishments.” So says the optimist. As I approach my fourth decade, the low water mark for ‘maturity’, I have experienced few of these famous ‘pleasures’; the supposed glory of an early bed, the wondrous quiet of an evening in. The trappings of the slow descent to the grave are perplexing to me; I have been unable to relinquish the defiance of youth and the splendid extremes of love and hatred that burn in the young.

My mother once promised me that I would grow to love my hair at a time at which I loathed it; a sweaty mass of untamed curly frizz that caused me to scowl each time I gazed upon the crowning wreck in the mirror. Mother’s wisdom was true enough. As a man ages he feels fortunate to have hair left at all. Its quality is never something that instigates jealousy or despair; to keep your head of it, whilst all about you are losing theirs (to paraphrase Kipling), is one of the few significant genetic social challenges affecting so large a number of men today.

Taming it is another matter. I had never considered a bristle brush for my hair until about a year ago. I had always been able to wake up, comb through the knotted parts and twist in whatever goop L’Oreal were marketing as the ‘best performing’ wax or gel on the market. This seemed to work primarily because I, in my shocking vanity, refused to look at pictures of myself between the ages of 18 and 23; however dreadful my hair actually appeared after exposure to the elements, not as I last left it in the bathroom mirror, I have never known. However, this approach has ceased to be an effective remedy for the wildness of my remaining locks.

My hair is certainly thinner than it was in my early twenties and because of this the curls are thinner, wispier and less easily tamed. A day of wind and my appearance veers from the passably respectable into realms of extreme inelegance; there is nothing so repulsively incongruous as a tailored suit with the head of Caliban. The joy of brushing hair was alien to me. I still looked to my fingers to reshape and smarten the forest. However, the futility of this gradually dawned upon me. I eventually conceded that the days of careless coiffure were over; I needed grown up tools for my hair.

One of the benefits of a bristle brush is that hair of all types can be parted, shaped and styled to produce respectably presentable results. Thin, thick, curly, straight – the brush acts as an artisan’s device, making sense and order of mess. Nowadays, the bristle brush, and the pomaded refinement, are less favoured; acceptance of ‘bed hair’, shorter styles, the preponderance of gel-spiking and a return to the romance of a bushy hairdo have all taken their toll on goods that seek to control. The old, heavily lacquered hair fashion is particularly repellent to women. As one commentator put it; “Greased down hair! Yuck. One fashion I’m glad died in the 50’s.”

However, despite the unlikely renaissance of this particular trend, it has always been preferential for gentlemen as they age to do so with dignity and style. Whilst hair need not be oil-slicked into lifelessness, a bristle brush can bring dignity to styles that, whilst once charming, no longer appeal as they once did. To do so is to acknowledge maturity; and in that, as in brushing, there is a small amount of pleasure.