Trouser Break: Yes or No? 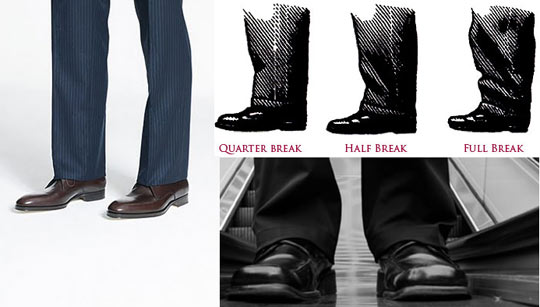 One of the biggest debates I have with tailors when adjusting garments concerns the trouser break. In short: I don’t like them, tailors generally do.

My dislike of them stems from aesthetic considerations, whereas their support for a break is often a split between aestheticism and tradition; some tailors make an effort of describing why a break looks better, others simply shrug with resignation that they have been taught to cut trousers thus – anything that runs against this is either incorrect, sartorially repugnant or both.

The case for them is predicated on the aesthetic preference that the back of the trouser should touch the top of the heel; a trouser break is inevitable if this rule is adhered to. The case against them is, in my mind at least, based on maintaining the purity of the trouser leg; a break is an imperfection, an unattractive one at that, which could be avoided.

Other arguments for the break relate to the profile of the trouser on the shoe, which I can certainly appreciate; when a trouser has no breaks, the top of the shoe is not always covered and this can, if done badly, be unsightly. When a trouser has a fuller length allowing for a break, the top is covered.

However, other arguments against the break include the ‘fattening’ of the lower leg; the break makes the trouser look slightly wider at the break point which, if you are like me, is psychologically exaggerated when contemplating it in the mirror and is therefore enough of a reason to avoid breaks entirely.

However this is, as always, entirely personal. Most of my friends believe some of my trousers are too short. I believe their trousers are too long and their breaks too pronounced. It is also a matter of proportion. I think the wider the leg, the bigger the case for a break. Tapered trousers following the shape of the leg should end with little or no break; wider leg trousers on the other hand positively ‘swing’ above the shoe if they do not have a break. However, the break on wider-legs should be minimised as the possibility for lower leg ‘fattening’ is even greater.

Tradition is there for a reason; certain cuts of trouser do look better with a (slight) break. However, ‘tradition’ in the world of tailoring is a misleading term; the fluidity of trend and its influence on tailored clothing means that some ‘traditions’ end up being not only incorrectly, but also, unattractively applied.