Two Items to Spend On: Shoes and Watches

“To look a million dollars” it has been said “a woman need only spend real money on her handbag and shoes.” When I re-utter these words to female friends with an eye for fashion, they nod knowingly like I am whistling them a song they recognise, but last heard a long time ago. “Yes” they tell me, “it’s true, you don’t need to go designer for your jeans if your shoes are Louboutin.”

And why is this? Is it something to do with the magnificent sparkle of a handbag and heel? Do they distract us from ubiquity with a jewel like lustre? The answer is, quite simply, yes and no. ‘Yes’ because most women’s designer shoes and handbags tend to have a better construction, and because they are extremely noticeable; heels can indicate expense like no denim on the market, no girl I have been with has failed to spot a Hermes Birkin. It is also ‘No’ because the quality of everyday women’s clothing has increased steadily over the years; though designer denim and clothing is desired, many people who can afford to wear it everyday choose to shun it for brands like Topshop.

It is starting to become possible to say the same for men. Not that we should run down to Hermes or Jimmy Choo, but that we should concentrate expenditure to some areas, and save on areas that can be saved on. So, what is the golden rule for men? For what should he spare no expense? 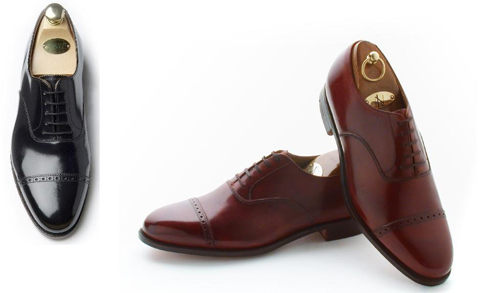 Cheap men’s shoes are a giveaway. If they are bad enough, they can throw a whole outfit off. It is a sad occasion when I see a splendid suit, perhaps vintage, perhaps even a hand me down, accompanied by cheap shoes. Never tell yourself ‘I’ll only wear through them and need another pair soon enough’. If you spend $100 maximum then yes, you will need another pair soon enough.

However, decent shoes from firms that have been providing high quality footwear for generations can last for nearly 20 years and only build character with age. My father has used shoes that he has worn every other day for 10 years. They have needed re-soling, and some heel work. But no stitch repair work has been required; the last has kept shape and the colour has enriched over the years like a wine from Pomerol.

Although such shoes would cost almost $900 new, the years they last for, and the elegance they give a man prove them an absolute bargain. The key is getting over that initial expense; tell yourself it will be worth it. Luxury shoemakers such as New & Lingwood, Church’s, Crockett & Jones and Edward Green manufacture such footwear. Choose a classic, not a trend shape, and they’ll look fabulous for the next decade.

For trend shoes, it is wiser to go for cheaper styles. I have a pair of winkle pickers I use for fashion looks, but they are from Zara. I would never dream of buying $600 Prada versions.

When gesticulating at the boardroom table, a man can show a lot of wrist. He will also, if he is wearing one, show a lot of watch. There is no two ways about it; a cheap watch will cheapen a look. I am no ‘name worshipper’, but in the world of wristwatches, to get quality, a man should resign himself to the idea of spending a good deal of money.

Recognisable brands such as Rolex, Omega, Cartier, Patek-Phillipe and Breitling will lift a man’s pedigree in the eyes of his peers; downgrading his whole look with a Swatch or a Timex is unfortunate. After all, a cheap watch can have the effect of making the rest of the outfit look below-par.

A solid timepiece from a recognised brand, not a johnny-come-lately designer who has decided to cash-in on the lucrative market, will decorate a man’s arm with reassuring luxury. It is perhaps ludicrous to pander to such things, but if it makes you feel any better, a watch from Rolex or one of the other brands mentioned is probably going to last you a lot longer and look good in the years to come without loosing its value on the market. Console yourself with the thought that women’s expenses never cease; they can never have too many handbags, and despite the designer name, their heels just keep on breaking.