Tucking a Bow Tie Behind a Collar 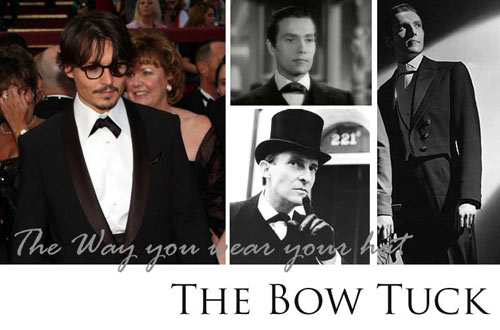 As I was wandering along the platform at a tube station, I noted the remarkable number of men, many of advanced years, with untucked shirt tails. One of these men, a solid looking chap of about fifty years, stood squinting at the dot-matrix, posed in a pair of well-cut jeans, a cord jacket and a red candy striped shirt which was untucked. Everything else in the ensemble was neat; the jacket was a decent length and fit; the jeans slim and tidy and his shoes, polished and of a high quality. It was simply nonsensical that a man with such attire should neglect, or at least contrive to neglect, to tuck his shirt in.

When recounting the story with a friend, he agreed that shirts should be tucked in but suggested that the rule of tucking was an uncertain one as there are many things which should never be tucked in. Among these were the jumper, the waistcoat and the bow and neck tie. On the last two, I disagreed. I think that tucking a tie into a pair of trousers, whilst unusual, is not offensive and have indulged in the practice on many occasions. Tucking in a bow tie is an altogether different proposition and, although very unusual, has an impressive precedence

One of my first recollections of the practice was Hurd Hatfield as Dorian Gray who wore nothing but turn-down collars in the 1944 film version of Oscar Wilde’s novel. However, it wasn’t until I became a young devotee of the Jeremy Brett Sherlock Holmes series that I noticed the practice was not due to a ‘special’ bow tie but simply a regulation bow which had been tucked inside the collar. Being of an experimental nature, I tried this myself on a couple of occasions. One friend I encountered was so offended by it that he untucked it and claimed it was an affectation.

I must admit that when I caught myself in the mirror, it did not look quite right; rather like a flower without its petals, or a butterfly without its wings. And yet, it still strikes me as a unique and, though certainly affected, serious way to wear an accessory that otherwise lacks seriousness. You can never appear stern in a bow tie; you can never appear silly in a bow tuck. The severity of it is perhaps why it does not appeal to many people, aside from tidy-minded dandies with immaculately ordered armoires and symmetrically arranged furniture.

The alternative is to use a bat wing and have it form an arch instead of a bar, as Depp’s does in the photo, affecting a looser, less formal style.